The Zen of healing 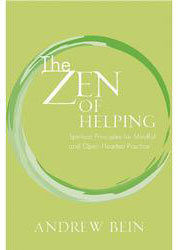 Bein, professor of social work, said the book "The Zen of Helping: Spiritual Principals for Mindful and Open-hearted Practice" does not sell the religion of Zen Buddhism. Rather, it applies the principles of Zen in guiding mental health practitioners, such as psychiatrists, social workers and counselors, to deal with clients and patients in a more spiritual and openhearted way.

Bein discovered Zen Buddhism 10 years ago, using its practice to overcome challenges in his life, including family struggles.

Bein said the social work field does not emphasize how to connect with clients on a close and personal level. He attempts to convey such interaction in his book through Zen methods.

He said mental health practitioners do not need to practice Zen Buddhism in order to incorporate its techniques into their work. The religion's methods may be used to provide compassionate care to clients in order to help them thrive.

Bein said his book is not only limited to professionals in the field. He said any type of caregiver, including parents, can gain from the book.

The book also advises consultants and physicians on how to interact with clients who have experienced trauma.

Bein stresses an openhearted approach in counseling by using the "strong back, soft front" philosophy of Zen. The "strong back" teaches the practitioner to stay strong-headed and calm, without letting his insecurities interfere with the situation. The "soft front" allows the practitioner to maintain a solid posture, while also feeling compassion and providing comfort to the client.

"Instead of the 'fight or flight' response, this helps us meet what's there in a more accepting way and stay compassionate with our clients," Bein said.

Bein said doctors often lack the "soft front" approach in their practice, in the sense of not personally relating to their patients.

He said "living in the moment" is another essential method to enhance the depth of caregiving.

When speaking with a client, he emphasizes, focusing on and appreciating the current encounter, without letting any outside forces interfere with that particular moment.

He said this allows the caregiver to have a deeper, closer and more meaningful session with the client.

Bein said he incorporates methods of Zen in his social work and spirituality classes. Last semester, Bein shared a manuscript of the book with his students, and discussed the principles embedded in it.

"I thought it was an amazing book," Mikalson said. "You find that 10 minutes later you're contemplating what you just read…I want to go back and read it again."

Mikalson works as the Lesbian Gay Bisexual Transgender project coordinator for the Mental Health Association of Sacramento and said the book's methods strongly aided her in performing her work more efficiently.

She said she not only applies the Zen principles in her practice, but she uses them on herself as well, primarily self-reflection and the art of living in the moment.

She said Bein taught the concept of self-reflection in class by conducting an exercise where the student lives in the moment, looks into oneself, and minimizes speaking with anyone for four hours.

She said she began knitting as a tool for self-reflection as a result of the excise. She said knitting is an activity she chooses to engage in to self-reflect and look into her own spirituality.

"I felt so much at peace," Mikalson said. "It was calming and soothing…letting your hands work so your mind can go."

Although Mikalson uses spiritual concepts in her practice, she said her clients sometimes take it the wrong way.

"How are you going to talk to client about something considered to be so taboo?" Mikalson said.

The book is now a required text for Bein's spirituality and social work classes.

Other Sac State social work professors, such as Robin Kennedy, now discuss the book in their classes.

This is Bein's first book, which took him nearly two years to complete. He said does not plan to write another book anytime soon.

Bein is currently contemplating where he plans to donate the money he earns from the book.

"I don't like the idea of requiring a book (for students) and making money off it," Bein said.

Bein is holding a book signing at the Avid Reader book store in Sacramento on Sept. 13.