Seoul, South Korea -- Buddhism has left an indelible legacy on Korean cultural heritage since its introduction to the nation in the late 4th century. 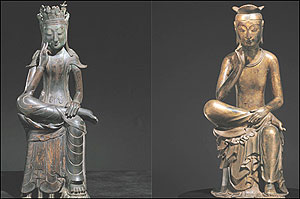 << “Eternal Images of Sakyamuni” published by the Korea Foundation features the Gilt-Bronze Pensive Image with Sun and Moon Crown (National Treasure No. 78), left, and the Gilt-Bronze Pensive Image with Lotus Crown (National Treasure No. 83). The two Buddhist sculptures, believed to be created in the 6th to 7th centuries, offer a meaningful glimpse of everyday life and the culture of ancient Korean society. / Courtesy of Korea Foundation

After more than a millennium, Korea's Buddhist artwork continues to attract keen attention, serving as a window into the spiritual world of the Korean people.

To show off the beauty of the nation's cultural heritage, two essential masterpieces of Korea's Buddhist artwork are coming under spotlight again in a new photo book, along with in-depth analysis in English.

The Korea Foundation has published ``Eternal Images of Sakyamuni,'' which features gilt-bronze pensive images (National Treasures of Korea No. 78 and No. 83) with an abundance of vivid and colorful photos.

For a thorough appreciation of the pensive images, the book includes about 100 photo images and illustrations of the two sculptures, along with detailed comparisons. In addition, there are also two essays by art historians Kang Woo-bang and Lee Jung-hee that provide readers with commentary from a scholarly perspective.

In cooperation with the National Museum of Korea that authorized the taking of new photo images, the book is a valuable source of information on Korea's Buddhist sculptures for English-language readers in light of a noticeable lack of reference materials on Korean artifacts in English.

The two Buddhist sculptures, believed to be created in the 6th to 7th centuries, offer a meaningful glimpse of everyday life and the culture of ancient Korean society.

The English-language hardcover book says that Northern Wei style is strong in Chinese elements, while the Northern Qi style has Indian elements.

``Though the influence of these styles is apparent, they were not adopted blindly; rather, they were developed to create a uniquely Korean style,'' the book says.

The two statues seem to be similar at first look but they are completely different from each other in style and form. The two are invaluable materials in the study of stylistic change to Buddhist sculpture in the early 7th century, the book says.

They are the products of a complex casting process using a lost wax technique, the process by which a bronze is cast from an artist's sculpture.

``Extant, life size pensive images in gilt-bronze were made only in Korea, while the difficulty of sculpting such as complex posture presumes highly advanced metal-casting technology,'' Kang Woo-bang, the former director of the Gyeongju National Museum, said in his essay.

``The pensive image has the most unusual but also human posture of any Buddhist statue, with its complex body structure making it very difficult to produce. In light of the pensive image's structural complexity, the masterful craftsmanship of the two Korean sculptures testifies to advanced standards of Korean arts at the time,'' said Kang.

The Sun and Moon Pensive Image had lost most of its gilding, but originally it was covered in gold. The thickness of the metal is around 5 mm, which is indicative of very sophisticated casting technology.

The Lotus Crown Pensive Image, however, still retains much of its original gilding.

Although both works are products of the late Three Kingdoms Period, they feature distinctive characteristics in terms of artistic style and form, as a result of the elapsed time between the dates of their completion.

Though the two sculptures were produced only 50 years apart, they show different patterns in style and form. For example, in No. 78, the crown is complex and lavish and in No. 83 it is plain and simple. The faces are also very different, but they are both large in comparison to the body and being vibrantly alive. The fingers touching the cheek are also rendered in the same lively way.

Being the two most perfect sculptures of their time, the gilt-bronze pensive images speak for the nature of faith during the Three Kingdoms Period, the book notes.

The book puts more emphasis on numerous photographs that reveal the details of the close-up cuts in various angles and focuses from their crown to their pedestal. It is unprecedented to take such a close look at the images of cultural heritages in great detail.

The two essays are: ``Two Pensive Images: New Interpretation on the Best of Styles from Two Different Ages,'' by Kang and ``From Siddhartha to Maitreya in Trance: A Study of the Iconography of Pensive Bodhisattva Images of Asia,'' by Lee Jung-hee, Professor of Art History, Portland State University.

The foundation said that the book will be distributed to museums and libraries around the world to raise awareness about Korean traditional artwork.