New insights into gods and men 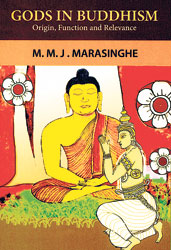 Colombo, Sri Lanka -- Gods in Buddhism is not a descriptive account of worshipping of gods. It is a thought provoking study of the worship of gods vis-a-vis the teachings of the Buddha as given in the Pali canonical texts. Buddhism is a non-theistic religion. Therefore, it does not accept either a single or a multiplicity of gods as having power or influence over human beings or human activity.

The author shows that the entire personnel of the supernatural beings recorded in the Pali canonical texts constitute three principal types. The first were part of Indian myth and legend before the time of Buddhism. The second are those adopted from the first type and then transformed to serve some specific function in Buddhism.

The third are those who are born into the ranks of the gods as a desired reward of the religious lives they led under Buddha’s dispensation. These constitute the hierarchy of supernaturals being worshipped by laymen in the present day.

Gods in Buddhism breaks new ground in its first chapter when it traces the beginnings of the Sramana cultural traditions to the culture of the Indus Valley Civilization. It may be recalled here that thousands of years after the destruction of the Indus Civilization, God Siva who was worshipped in the Indus by the non-Aryans becomes the chief god of the Aryan religion. Professor Marasinghe shows the implications of the Indus cultural strain for the blossoming of the Sramana religious philosophies of the Buddha’s day.

The book reveals to the reader the valuable evidence contained in the Pali canonical texts of the formative period of the growth of the state in place of the claim to janapadic (Regional) or tribal identities. This is demonstrated with the growth of the Kosala and the Magadha empires over the vanquished hitherto independent tribal oligarchies. Of these two, it was the Magadha Empire which finally succeeded in becoming the most powerful political regime of the period in India – as much as the growth of the Kosala and the Magadha Empires meant the forcible absorption of the tribal oligarchies resulting in planned resettlements to prevent future re-grouping on tribal basis.

The ultimate growth of these two states into one single powerful empire left no more powerful or strong enough tribes to defy the power of the central Indian State. This, as Professor Marasinghe explains led to the peaceful incorporations of tribal peoples of the outer regions. It is as a result of such peaceful incorporation that the major religions like Hinduism and Buddhism came to accept and accommodate tribal religious rites and rituals into their religions, sometimes even by writing new religious texts to their religious scriptures.

The striking difference between the questions asked by the Yakkhas and those asked by the gods has led the author to the discovery that the groups of beings described as Yakkhas, Nagas, etc., hitherto classed as non-human beings (amanussa) by writers on Buddhism were none other than tribal people of the regions which came in close proximity to the boundaries of the new Empires. The spread of Buddhist influence seems to have helped the assimilation of some of these tribes like the Yakkhas of Alavi. The Pali texts record instances where those who were turned homeless by the conquests of the new kings were turned into IDPs, seeking food and shelter in the new centres of trade and political power.

The evidence in Pali canonical texts is quite clear that the Buddha said there are gods. He has stated that his enlightenment was not complete until he gained the Eight-fold knowledge and insight which surpassed the gods. It is interesting to see how he gained his knowledge of the gods. It was not the result of an inspiration or a vision from an external source or power. It was the result of his acquisition of the higher knowledges. The Buddha’s knowledge of the gods is not the exclusive right or ability either of the Buddha or of the arahat. It is quite clearly shown that it can be acquired by any one by following the path of spiritual training laid down in Buddhism, after he attains the Fourth Jhana, if he so desires.

There is a world of difference between the gods who the Buddha said there were and also communicated with and the gods believed in and propitiated by the world. While the gods of popular acceptance have the power to help or harm man, they are believed to possess specific powers and abilities.

Unless they are kept in good humour by proper attendance, it is believed that man can end up in real disaster. The gods in the Buddhist conception are merely a class of non-visible beings who have no power or influence over man or the world. Professor Marasinghe’s timely research raises many serious questions for those who have made Ritual Buddhism a mere second class Hinduism adopting any and all rites and rituals totally disregarding the clear teachings of the Buddha.