LONG BEACH, CA (USA) -- When the Venerable Ly Van, a monk at the Glory Buddhist Temple in Lowell, Mass., died in 2008 he didn't leave much behind. 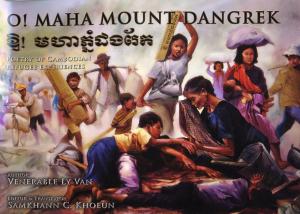 However, what he did leave to posterity was a rather remarkable document that, in its lyricism, poignancy and richness, surprised all at the temple, even those who were close to him.

In an immaculate Khmer calligraphy, the 90-year-old monk transcribed two long narrative poems he had written, one called "The Khmer Rouge Regime: A Personal Nightmare" and the other titled "The Unfortunate Love of Sophoan Chea," a tragic tale also set in the time of the Khmer Rouge.

Feeling the Khmer-language poetry deserved a larger audience, educator Samkhann Khoeun meticulously translated the work and created a book and a Khmer-language CD titled "O! Maha Mount Dangrek: Poetry of Cambodian Refugee Experiences." The title refers to the treacherous mountain many Cambodians had to traverse to escape their homeland and cross the border into Thailand and the refugee camps.

Khoeun and the students from Cambodia have been touring the country to give their readings. In addition to readings in New England, they have visited Philadelphia, Chicago, Maryland and Minnesota. They delivered readings in Northern California before coming to Long Beach.

Khoeun said his translation, which took two years with the help of volunteers, was a "labor of love."

"At first I was impressed with the calligraphy," Khoeun said. "But then when I really started to read I said `Wow.' It was so rich in history."

Khoeun, also a survivor of the Killing Fields that left upward of 2 million Cambodians dead, says he experienced many of the same things during the genocide Ly Van wrote about. For that reason, he says, it still brings tears to his eyes.

George Chigas, a professor of cultural studies at the University of Massachusetts Lowell, wrote that the poems make important contributions to existing survivor literature and that Ly Van writes "with the lyricism of a skilled poet and the wisdom of a learned Buddhist monk."

Although Ly Van initially wrote the two poems before he became a monk in the early 1980s, Khoeun says it exudes the devout Buddhism that was always a part of the monk's life.

"The Khmer Rouge Regime" is written in a rare 11-syllable meter, while "The Unfortunate Love of Sophoan Chea" is in the more traditional seven-syllable meter.

Chigas and Khoeun say the second poem compares favorably with "The Story of Tum Teav," a classic tale of tragic love in Cambodia also written by a monk.

Khoeun, who is an activist in the Cambodian community in Lowell, says he hopes the book will resonate with readers and help with the ongoing healing process for many who still suffer mentally from the effects of the war.

"This is a way to help overcome the suffering," Khoeun said.

"Men and women must preserve these memories and never let them be forgotten," Ly Van wrote. "The savagery of the Khmer Rouge regime should be permanently etched in stone, and this history should be taught and passed to future generations."

In addition to the poems, which are presented in side-by-side translation, "O! Maha Mount Dangrek" includes photos from the Khmer Rouge reign and the refugee camps and a glossary and other informative features.

Khoeun says he hopes portions of the the book will be entered into the record of ongoing Khmer Rouge war crimes tribunal in Cambodia.