Dharamsala, India -- A graphic novel on the life and personality of the Tibetan leader His Holiness the Dalai Lama will now be available in 10 languages in different parts of the world. 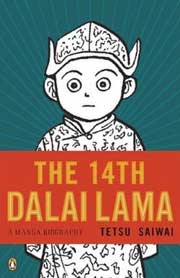 It will be an innovative, great fun and colourful source of information on Tibet and its exiled leader that is expected to especially appeal to the children.

The novel idea is set to be introduced in the Buddhist Republic of Kalmykia in Russia, where children will get to read a biographic novel about His Holiness the 14th Dalai Lama written by renowned Japanese cartoonist Tetsu Saiwai.

In his “The 14th Dalai Lama - A Manga Biography”, Saiwai used the art of classic manga (Japanese graphic novel or comic book) to illustrate the biography of the Nobel Peace Laureate.

The comic launched on his 73rd birthday in 2008 in Japan, has now been translated from Japanese into 10 other languages, including English and Russian.

While the English version will be launched worldwide on September 28, the novel in Russian language has already been made available in the Republic of Kalmykia, where Buddhism is the dominant religion.

A total of 1,500 such comics have been made available to children in the Buddhist community of Kalmykia under a joint initiative of the Moscow-based Save Tibet Foundation and the Kalmyk-Japan Friendship Association.

After conducting intensive research in Lhasa, the capital of Tibet, Saiwai was able to capture unique and stunning images of Tibet and its people as they struggle to survive and face the threat of the extinction of their language. The illustrations in the comic are connected to the true life of the 14th Dalai Lama.

The artist and writer has future plans to feature the life histories of Jesus Christ, Mahatma Gandhi, Martin Luther King and Mother Teresa through his art.