New Delhi, India -- Much of the source material available on Cambodian Buddhism is in French. This is understandable, given that France was Cambodia's colonial power. What is available in English is only scanty. 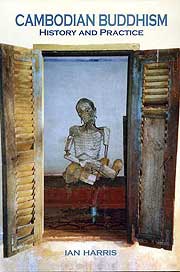 This book is an attempt to fill this gap. In a chronological order, it traces the development of Theravada Buddhism before the arrival of the French, and then the politicised Buddhism, which had its beginnings in the middle of the 19th century. That the author, Ian Harris, has made extensive research into the primary as well as secondary sources stands out clearly from the work.
Evidences

In the first chapter, Harris discusses the place of Buddhism in Cambodia's history from the period of Funan to Angkor, citing epigraphic, art historical, and other documentary evidences. Although it is difficult to establish precisely when Buddhism arrived in Cambodia, the standing Buddha in varamudra and the images of the Buddha in parinirvana point to its existence from ancient times.

While the factors that led to the development of Theravada Buddhism following the fall of Angkorian power are dealt with in the second chapter, the next two chapters are devoted to a detailed study of its various aspects. The death of King Ang Duang marked the end of the middle period and the beginning of the modern, with unexpected influences. The way the pre-modern Khmer interpreted their environment from the physical and mythological perspectives is also explained. In the modern context, Thailand, which signifies orthodox Theravada values, influenced Cambodian Buddhism.

Analysing the literary sources and practices related to the Cambodian Buddhist tradition, the author argues (in the fourth chapter) that the Tripitaka was hardly known in its entirety in Cambodia until modern times. He contends that the influence of the Indian epic Ramayana was seen in Cambodia for more than a millennium. But the story in vogue there was somewhat different from that in India and other regions of Asia. For example, in the Cambodian version, King Janaka finds Sita on a raft sailing down the Yamuna.
Umbrella war

The next chapter narrates how Cambodian Buddhism reacted to the challenge of the colonial rule and brings out the conflict between the traditionalsits and the modernists. Monasteries were in the forefront of the freedom struggle and the Coa Dai movement was founded by Ngo Van Chieu. Monks, with umbrellas in hand, staged a huge demonstration, which came to be known as “umbrella war.” During May 1930, Ho Chi Minh founded the Indo-Chinese communist party. The colonial authority established the Buddhist Institute to save Cambodian Buddhism from degeneration and to counteract Thai influence by creating a strong sense of Indo-Chinese identity.

The seventh chapter presents the religio-political dimension. From 1970, Cambodia started slipping into disorder and lawlessness. Monastries were demolished (1970-73) and converted into military bases. Resistance by the monks was met by execution. Buddhism plunged into a dark period during Pol Pot's regime and, in 1975, it was mandated, inter alia, that the monks be defrocked and made to grow rice.

The re-emergence of Buddhism after the downfall of Pol Pot, its reorganisation, and the restoration of the sanghas are dealt with in the eighth chapter. The year 1978 saw Heng Samrin attempting to unite all patriotic forces, including the Buddhist monks, and the founding of the United Front for National Salvation of Kampuchea, which succeeded in liberating the country with the aid of Vietnamese troops. The anti-religious policies of the Pol Pot regime were reversed. But the process of Buddhist revival was slow for various reasons. For one, the government itself was backed by the Vietnamese and, for another, Buddhism had lost a large number of educated monks during the troubled times. The break-up of the Soviet Union, the exit of Vietnamese from Cambodia, and the internationally monitored elections in 1993 have also had their impact on the restoration process.

The Cambodian inscriptions of the pre-Angkorian and Angkorian Buddhist periods are explained in the appendices, which also provide detailed notes and references. Those interested in the cultural history of Buddhism in general and Cambodian Buddhism in particular will find the glossary and bibliography very helpful. Ian Harris deserves to be complimented for having done an excellent job in presenting the history of Cambodian Buddhism to the academia and the lay public alike.