What would Jesus and Buddha do  on holiday?

Tokyo, Japan -- What would Jesus and Buddha do if they were suddenly thrust into contemporary society, and how would they react to what they found? 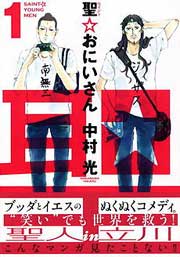 Nakamura (her surname) depicts the adventures of the two religious founders as they room together in Tachikawa (a suburb west of Tokyo) while vacationing in Japan.

Humour, rather than veneration, sets the tone for the series, which is replete with visual gags and puns. For example, when the roommates discover that the prizes they have won at a shrine festival are cheap imitations of coveted handheld videogames, Nakamura quips: "The two were enlightened as to the true flavour of Japanese festivals," playing on a double sense of the word daigomi, which can either mean sublime Buddhist teaching or – more colloquially – the "true charm" of something.

Similarly, quirky interactions that juxtapose episodes from Jesus's ministry with hilarious social faux pas provide opportunities to chuckle. When Jesus says that he "just wants to wash his [disciples'] feet," a local gangster who overhears him misinterprets this phrase in its figurative sense as an indication of one's desire to start afresh after a life of crime. Jesus, oblivious to this misunderstanding, unwittingly gains notoriety among the mob as a particularly tough villain.

Nakamura's protagonists, though saintly, are hardly infallible. Jesus's all-encompassing love makes him excessively enthusiastic (Nakamura portrays him as a compulsive shopaholic), while Buddha's ascetic tendencies make him seem – as the back of one volume states – like "the parsimonious lady next door". The roommates drink beer, update blogs, and play online games, generally trying to have a good time while assiduously attempting to blend into contemporary. Like many tourists, however, they stick out like sore thumbs.

Teenage girls swoon over Jesus because of his resemblance to Johnny Depp, while neighbourhood boys tease Buddha for the auspicious tuft of hair on his forehead. Inadvertent performance of miracles also threatens to reveal their true identities. Jesus, for example, mistakenly turns the water of the local public bath into wine, while Buddha literally glows in moments of excitement.

Nakamura's rather irreverent depiction of these religious founders may seem blatantly sacrilegious, but upon investigation something more intriguing is apparent in her work.

Statistically speaking, levels of religious belief and affiliation are strikingly low in contemporary Japan, and most people prefer to describe their participation in apparently religious activities as custom or amusement. This has led some observers to anticipate the incipient demise of religion in the country, and no doubt some might be tempted to use Nakamura's work as evidence in support of this hypothesis. However, whereas some author-artists have tended to downplay religion in their works or have used manga as a vehicle for criticism of the allegedly pernicious nature of marginal religious groups, Nakamura makes religion startlingly normal.

Her story is not an introduction to abstruse religious doctrines, nor does it feature much overt commentary on the role of religions in contemporary society. Rather, she invites her readers to view contemporary Japan through the eyes of protagonists who are unambiguously religious.

While Saint Young Men hardly exhibits strict fidelity to canonical sources, Nakamura has done her homework. She seamlessly weaves tales of the Buddha's former lives and gospel accounts of Jesus's ministry into her narrative, loosely citing the biographies of these founders while (literally) drawing those stories into the present. While it is doubtful that her audience reads the manga for religious inspiration (and it is similarly doubtful that Nakamura intends to proselytise), one possible result of the work may be increased audience familiarity with – and even interest in – such canonical stories. It is therefore not insignificant that Nakamura's farfetched plot demands willing and sustained suspension of disbelief.

While it remains to be seen how Saint Young Men will be interpreted over the long term, for the moment it has successfully captured the mercurial interests of contemporary Japanese audiences.

The incongruous juxtaposition of ostensibly sacrosanct figures with mundane situations such as overpriced cafes, busybody landlords and free refills at family restaurants is inherently humorous, and through their eyes quotidian Japan suddenly looks exciting and new. Jesus and Buddha enter the audience's imagination not as staid preachers, but rather as the adventurous boys who live next door. The manga therefore demonstrates that venerable religious figures lead active lives outside the hallowed halls of church and temple and beyond the margins of scripture.

While religion may be a laughing matter for Nakamura and her audience, the role this manga might play in building and sustaining familiarity with the biographies of religious founders is certainly not to be scoffed at.