Singapore -- Plans are afoot in the Buddhist Fellowships of Indonesia, Malaysia and Singapore to commemorate Vesak 2016 in a way that the Fellowships hope will be inspiring as it is novel. 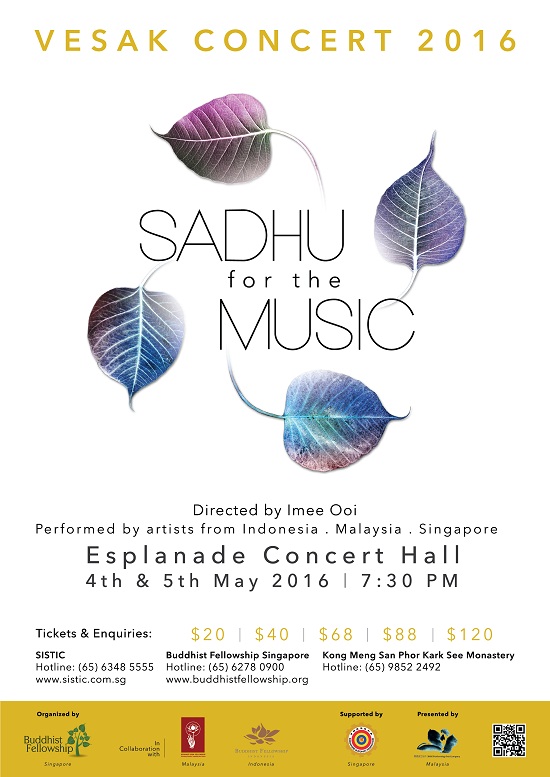 For the first time, the three organisations will collaborate closely to organise a regional concert at the Esplanade, Singapore’s foremost performance venue for the arts.

This concert is a direct response to reach out to the growing numbers of people who may have a cursory interest in Buddhism, but may not see how the Buddhist teachings can relate to their lives, nor understand how to start on their journey of understanding the Dharma.

Taking a leaf out of the Bodhisattva Avalokiteshvara’s book, the concert is a singular effort to employ the skilful means of music to build a bridge to these people – people whose lives could be touched and transformed by the Buddha Dharma, but who have yet to benefit from current methods of propagating the Dharma.

By not only talking to people’s minds but also to their hearts, the concert is a platform to connect people who are unfamiliar with Buddhism not just intellectually but also emotionally, using music to leave behind a stronger imprint of the Dharma.

The secret to holding a successful Buddhist concert is to have good Buddhist music. To uplift the spirit and calm the mind, Buddhist music must have a quality that brings it beyond the usual melodies we hear in everyday life; in short, it must be composed and conveyed in a spiritually inspiring way.

Helping to impart this “special” quality to the production is Ms. ImeeOoi, an internationally acclaimed Dhamma music producer, composer and vocalist, who will take the reins of the concert as Concert Director.

Imee, who has dedicated her life to focus on the development of Buddhist music, will be intimately involved in the production from the start to finish. From picking the most suitable songs to building an engaging story, Imee has been involved in every aspect of the production to ensure an event of high aesthetic quality. But going beyond her duties in directing the concert, she is also contributing her time to training the performers to be Dharma “messengers”, able to carry both a tune and the Buddhist message through song.

It is also the concert team’s aspiration that this year’s concert will be but the start of a larger movement to enable our community to use music to share the teachings, and to build the human capital needed for this endeavour.

As this concert is held specially during the month of Vesak, it is also especially important that different members of our society are able to share the joy of the occasion.

The Buddhist Fellowship is reaching out to members of old folks’ homes, orphanages, Buddhist youths, and monastics, to enable them to come together and participate in the event. Through the songs as well as the personal engagement of volunteers, it is hoped that this will be a good way to reach out to many more people who may be interested in the Dhamma.

The three organizers hope that through this concert, the timeless Buddha-Dharma will be introduced to many in the form of music and the performing arts, 2558 years after the Buddha first made the wisdom He discovered known to the world.

Imee Ooi, Malaysian music producer, composer, arranger and vocalist. Founder of IMM Musicworks in 1997, she has now released more than 50 albums of her own, and has produced countless musical works for Buddhist societies and organizations around the world.

A devout Buddhist, Imee’s serenely pure voice and unique sense of musical arrangement has established her own genre in spreading the sounds of Dharma through Sutras, Mantras, and free composition that has transcended religious barriers and touched a variety of cultures and age groups. Imee’s works have also been regarded as a significant milestone in the development of Buddhist music with a wide range of compositions sung in seven different languages.