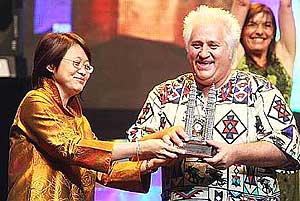 << Rhythm and soul: Chew presenting the Best Composition first prize of the Master Hsing Yun Award to Winner Harmse for his song "I Vow".

Their compositions consisted of a range of musical styles such as soft rock, sentimental and new age to express the truth, beauty and benevolence of Buddhist teachings.

The Sounds of the Human World was first launched in 2003 to commemorate Master Hsing Yun's 50-year effort to develop Buddhist hymns.

It aims to present original songs and to popularise Buddhist hymns.