Singapore -- The Green Lantern (GL) mythos speaks of the universe being invisibly yet carefully divided into thousands of intergalactic sectors, each guarded by an appointed member of the GL Corps. Reminds me of the concept of Buddhalands being compassionately watched over by cosmic Bodhisattvas. 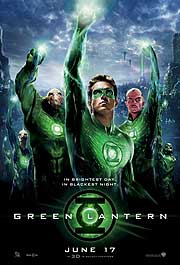 Of course, each would traverse across vast distances to assist one another when needed, with united will and vision. Like the Bodhisattva ideal, each GL serves as a keeper of peace, order and justice, as ones with the highest of honours and the greatest of responsibilities. Also like timeless ancient Bodhisattvas, GLs have served their roles since time immemorial. With their headquarters based on the planet Oa for countless millennia hosted by immortal Guardians, it is somewhat like the Pure Lands, made of spiritual gems which emit wondrous light, which are essentially watchtowers and schools created by deathless Buddhas for training Bodhisattvas.

GLs have the power to manifest skilful means with their will, to create forms with their thoughts through power rings to save the day. Just as skilful means are limited only by the combinations of compassion and wisdom, their powers are only limited by their will and imagination. Pure Lands too are formed through the wills of Buddhas, based upon their great vows and their actualisation. Mastery of the rings means to master the mind by focusing and disciplining the will – even in challenging conditions. This too is a very central Buddhist concern! Not being perfect, each GL is selected not so much for fearlessness, but for their potential of having great courage in the face of great fear. Strictly speaking, only the Buddhas, who are perfected heroic Bodhisattvas, are truly fearless without peer, for they are able to see things just as they are, with total calmness and clarity in the light of reality.

When the best of GLs’ virtues work together, these qualities are projected and magnified by their rings which serve like wish-fulfilling jewels (gems) in Buddhism, as they have the ability to actualise any well-meaning intentional thoughts. Each wish-fulfilling jewel also stands for the Dharma itself. When the Dharma is practised well, merits are naturally accumulated such that one’s wishes are increasingly readily fulfilled. The natural safety catch is that wish-fulfilling jewels only fulfill wishes which are aligned with the noble principles of the Dharma. This concept happens to be congruent with how the rings work – only for altruism. Like the jewels’ blessings, the rings’ power is karmically deserved, as they are able to discern exact worthy wearers.

The GL vow goes – ‘In brightest day, in blackest night, no evil shall escape my sight. Let all who worship evil’s might, beware my power, Green Lantern’s light!’ The human Hal Jordan is said to be the GL with the strongest light of will, thus capable of the greatest and bravest of altruistic deeds. Sounds like how Amitabha Buddha, whose name means ‘the fully enlightened one of infinite light’ is able to will his light of blessings to shine throughout the immeasurable reaches of space to offer his compassionate blessings! This light can even be seen in broad daylight by those who connect to Amitabha Buddha via mindfulness of him. Initially, Hal was uncertain of how he could be an effective GL. But the ring that chose him detected his hidden potential. This is reminiscent of how the Lotus Sutra spoke of the parable of a precious gem secretly sewn into the hem of a poor man’s robe – which represents the treasure of Buddha-nature within, always awaiting to be discovered.

Much of the GL movie is a discourse on the tension between the strength of just will and crippling fear. Will is said to be an energy emerald in colour, that is the most powerful force in the universe. This brings to mind the Buddha’s teaching of how the mind is the forerunner of all phenomena – including the specific formation of matter. Mind over matter! Willpower however has the ignoble and treacherous ‘yellow’ enemy that is fear, that is capable of rendering one weak-willed. Even the fear of admitting one is afraid can prove hazardous. To acknowledge fear, however, does not mean to be weak or to give in to it, but so as to muster one’s will, to better brace oneself to face and overcome fear.

Part of the terror of fear, or of terror itself, is how fear is unpredictable and susceptible to corruption when wielded as a power. A Guardian tried to master the essence of fear to harness its energy but became consumed by it, thus becoming fear itself – a demonic force called Parallax. Sinestro, a senior GL, suggests harnessing fear again, to fight fear with fear. Sounds like terrorising terrorists with terrorism? As history in the movie’s story and in real life shows, it is dangerous indeed, and usually backfires in the long run. As warned by the Buddha, hatred can never be ceased by hatred, hatred can only be ceased by [the understanding] of loving-kindness. So what if Parallax is a superpowerful being? Aren’t the GL Corps together even more superpowerful?