Inner Path Festival of Buddhism kicked off on November 21

New Delhi, India -- This year marks the third annual Inner Path Festival. The first was in 2012 from April 27 to May 1. This year’s event will be November 21 to November 24, with completely free entry. The festival features art exhibitions, dancing, films and philosophic discourse. 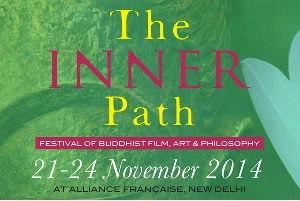 The works and films showcased at the Inner Path Festival of Buddhism were selected based on Aruna Vasudev’s desire to screen works that “open the path to Buddhism.” Aruna Vasudev is the director of the festival as well as President of the Network for Promotion of Asian Cinema (NETPAC).

The festival aims to promote an understanding and appreciation of the art and philosophy of Buddhism. The festival takes place in India, the birthplace of Buddhism, at the Alliance Française in New Delhi.

Two films being shown are Kung Fu Nuns, and Sun Beaten Path. Kung Fu Nuns revolves around a young woman leaving home to become a Drukpa nun, the Buddhist religion named for Dragons. She learned Kung Fu and began performing the ancient Dragon Dance, empowering the women of the remote Ladakh mountains and valleys. Sun Beaten Path, produced in 2011 by Sonthar Gyal, was an award-winning film that focused on the Buddhist attributes of redemption and contemplation.

“Gyal is a Tibetan filmmaker who lives in Beijing and looks at the largest aspect of Buddhist virtues in his works,” says Aruna Vasudev. “The scale of the festival this year is larger, with over 16 feature films and documentaries, with a focus toward drawing more practitioners to Buddhism.”

Other performances that one can expect at the Inner Path Festival include Ani Choying Drolma, the Nepalese singing nun. She puts her own spin to Buddhist and Tibetan chants, and does so beautifully. There will be an art exhibition of 20 artists, including Arpana Caur, Shefali Munjal and Oamar Dagar.