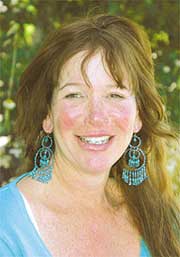 The 16 movies are a mix of documentaries and features from around the globe.

One of the documentaries, "Ethics for a New Millenium," was co-produced by Karen Day of Hailey. An independent journalist and filmmaker, Day focuses on humanitarian issues. The 2003 film was filmed during a Dalai Lama address at London's Prince Albert Hall on the second anniversary of 9/11. Day will entertain questions after the film is shown at 6:45 p.m., Sunday, Sept. 11, at the Liberty Theatre.

It was co-produced with Link Television and Robert Thurman of the Tibet House. Another film they produced, "Ethics and the World Crisis," was filmed at the Town Hall in New York City. These are the first two of a six-part series called "Conversations for Peace."

Day has been present at least 30 times when the Dalai Lama has spoken, she said. She is co-authoring a book with National Geographic photographer Steve McCurry. Called "Peace Makers," it's about 12 different icons of peace, including Desmond Tutu, Nelson Mandela, His Holiness the Dalai Lama, Václav Havel and Shirin Ebadi. It will be published in the fall of 2006.

"His Holiness says, 'I believe in action (when it comes to peace).' This is what he lives. He walks it. His coming here is action. Mary (Gervase) and Claudio (Ruben) took action when they founded the Spiritual Film Festival," Day said. "This is an active community. Look at all the things going on, everyone's contributing. We're so lucky we have this kind of direct inspiration come to us. If there's anything this offers us, it is to remind us do something, do it now."