Binghamton, NY (USA) -- For most viewers of NBC's hit show My Name is Earl, the closest thing they'll ever see to a Buddhist teacher wears a mustache and looks like he slept in his shirt. Which is probable. 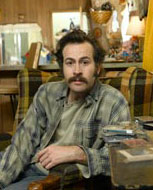 The sitcom's premise, that "karma is a funny thing," depicts a guy who has done nothing but bad things in his life before realizing that might be the reason his life isn't so great.

"Every time something good happened to me, something bad was waiting around the corner," Earl explains to viewers, as he scratches off a winning lottery ticket just before getting hit by a car.

That's karma, says Earl, played by Jason Lee. And that's why he's trying to right every wrong he has ever committed.

Karma originated in the Hindu faith in India. Hindus believe a person must rely on good karma if they want to move into a higher social class in a future life, explains Youru Wang, who teaches religion at Rowan University in Glassboro, N.J.

"If you step on an ant by accident, then you will not have bad karma," Wang explains. "But a person will always have evil thoughts in mind, even if he or she didn't realize it."

There are some similarities between karma and the Christian concept of the Golden Rule, which teaches you should do unto others what you would have them do to you. But in Buddhism, karma is a law of nature, Wang explains. It's not God's punishment.

"For my students, they say karma is quite widely accepted in this society," says Wang, adding there are some similar American ideas. "Students always use, 'What goes around comes around.' That's a common belief."

From television shows to movies such as The Matrix, to the popularity of martial arts, tai chi and yoga, Americans are growing increasingly familiar with and accepting of Eastern thinking.

Stephanie DeCosta, an English teacher at Triton Regional High School in Runnemede, N.J., asked her ninth- and 10th-grade students to write essays about their thoughts on karma. Most cited examples of it in their own lives.

Danielle Netter, a student at Triton, says she agrees with the concept of karma as the "fate or destiny of a person, based on their actions."

One day in school, she said a friend laughed at her for having sawdust on her pants. While she was laughing, the friend was hit in the face by a swinging door.

"I told her that was bad karma, and walked away laughing," wrote Netter. "I believe that my friend had bad karma since she laughed at me, and her punishment was being humiliated."

Nai Hsiao has been studying Buddhism for four years, and volunteers at a Buddhist monastery in Shamong, N.J. She believes Buddhism helps explain what goes on in the universe.

"There's always a reason that things happen," says the 38-year-old nurse. The results of what we do might not show up immediately, she says, or even in this lifetime. That's why it is so important to treat others with compassion, remain mindful of one's thoughts and actions, and avoid doing harm.

"You always want to do good things, so that you will have a positive result," Hsiao says. Or, as Earl says, "I'm just trying to be a better person."