Google may search for Buddha

Kolkata, India -- Buddha Films, the Hollywood-based entertainment outfit of the BK Modi group, is planning to tie up with the leading search engine of the world, Google, to launch a global hunt for the face that will play the title role in the film Buddha, the $120 million venture of the group. 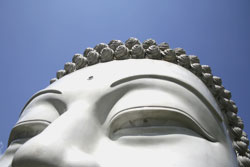 In an exclusive interview with Business Standard, the chairman of Buddha Films, BK Modi, who is now based in Beverly Hills, said preliminary discussion were on with Google for the global talent hunt.

He said a lot of people across the globe had shown interest in playing the role of the Buddha, but not one matched the image of the Buddha.

“A leading actor of the Japanese film industry has approached us for the role. But it was not an ideal match. We want to do the film in a way that it becomes a reference point for Buddhists and for mankind,” he said.

According to Modi, the modalities of the hunt were still being discussed with Google.

He made it clear that the hunt would be based on images of the Buddha generated by software engineers in Silicon Valley.

“The software engineers have come up with wonderful images based on history and other information available from various Buddhist societies. We need a face that fits those images. The character of the man who will play the Buddha is also important,” he added.

Several parallel streams have created different images of the Buddha. The Buddha was born six centuries before Christ in Kapilavastu, on the border of present-day India and Nepal, into a princely family, and had forbidden the creation of any image of himself.

The Buddha was represented by an empty throne, or a pair of feet, or a wheel (kala chakra).

Respecting this advice, Buddhists did not create any image of the Buddha till more than 500 years after his death, when artists of the Gandhara school in Kandahar combined Indo-Grecian influences, and Indian sculptors at Mathura created his first images.

Contemporary texts described the Buddha as one who radiated the eternal peace and “nirvana” that he had attained in his life, and one with perfect eyes, elongated ear-lobes and exquisite limbs.

Similar high profile movies on religious personalities, like the recent movie on the last days of Jesus Christ, were preceded by a limited search because the role was narrowed down to Caucasian actors despite the West Asian origin of the founder of Christianity, said a leading Indian producer who had earlier produced Satyajit Ray films.

“Buddha” is the first project of the film company.

It is to be directed by noted director Shekhar Kapoor, known for the epic period movie Elizabeth, on the medieval queen of England. He was in Kolkata for the 2550th Buddha Jayanti celebrations.

Modi is the president of Mahabodhi Society of India.

He pointed out that the software engineers appointed for creating the images of the Buddha were those who created the images in the Hollywood blockbuster Lord of the Rings.

Lord of the Rings got Oscar nomination for its special effects.

After Buddha, the group will produce 2-3 more big budget Hollywood movies which would be launched globally.
TOP