An Offering of "Broken Flowers"

Singapore -- The film "Broken Flowers" is a paradoxically "deadpan yet refreshing" offering starring the comedic genius Bill Murray - who appears still pretty much "lost in translation" (which was his recent major work). "Broken flowers" has Zen-like simplicity, while speaking many universal truths between its spoken lines. 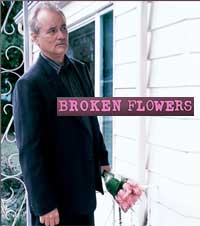 Don Johnston (played by Murray) is a Don Juan of sorts, who had never seriously connected or committed with any of the numerous girlfriends he had, or any other human being in fact. Ironically but fortunately, he has an incredibly warm-hearted neighbour - Winston (played by Jeffrey Wright), who does his best to connect with him, with much hilarious effect, as he gives him all kinds of advice, both wanted and not.

Don's latest girlfriend (played by Julie Delpy) had just walked out on him, leaving him in an existential spiritual vacuum, making him question the worth of his life. He was in a way suspended in a bardo state, adrift in a limbo with no decided purpose. But all that is assumed, as we read his subtle expressions - which seem to silently scream of a suppressed "mid-life crisis". Already a successful businessman, we see Don wondering what's wrong with his life. Perhaps the lack of joy arose from not having anyone to share his success with. True success then, must be more than success for oneself; it must be being able to successfully share your success with others! In the words of Shantideva from "A Guide to the Bodhisattva's Way of Life" - "All the joy the world contains is through wishing happiness for others. All the misery the world contains has come through wanting pleasure for oneself."

Don recieves a mysterious anonymous letter, supposedly written by an ex-girlfriend, which claims that he has a teenager son born out of wedlock, who might well be on his way to find him. Don suspects it to be a prank, but Winston urges Don to go on a road trip to do some detective work, to seek clues from his list of ex-girlfriends, so as to discover who sent the letter. The dispassionate Don sees it as rather pointless, but the persistent Winston suggests that it could be a turning point in his life, that this might be a sign of new directions to come. Winston is of course right. In fact, everything that happens to us is surely a sign of something, the fruition of past karma and our present attitude, and hints of how we should change our ways for the better - for oneself and others.

Half-heartedly following the itinerary meticulously planned by Winston, the lonesome Don goes on a road trip through parts of suburban America, bearing flowers for every old flame he meets. Sadly, beautiful but faded as most of them are after all these years, each woman was somewhat a "broken flower", all suffering in silence in some sense from the vicissitudes of life. Every reunion is bittersweet, as they recall their past times together and how they have come to pass. Don even realises that one of his girlfriends had passed away, and offers flowers at her grave. How reminiscent this is - of the Buddhist practice of offering flowers at the Buddha's shrine to remind ourselves of the truth of impermanence, of the transience of life. The significance is not of gloom and doom - but to recall the urgent need to treasure our lives. Flowers, no matter how beautiful and sweet-smelling, will eventually be broken flowers - though they too can thereafter fertilise new flowers!

The journey turns out to be more than an easy search. It evolves into an accidental pilgrimage for forgiveness and reconciliation, for a probable family and the love it "promises". More than a quest for the simple truth of who wrote a letter, it became a quest for personal identity and happiness. It was as if he needed a genuine heartfelt meaningful connection with someone - anyone - to prove the worth of his existence. Afterall, our identity only makes sense in relation with others. Towards the end of the show, on his way home after a seemingly "futile" trip - at least in terms of finding the letter-writer, he spots a boy (played by Mark Webber) to whom he has a strong hunch to be his son. Seeing him hungry, he generously offers to buy him a meal. It was a brave attempt to connect with someone, a stranger in fact, as the audience almost expects a happy ending, anticipating a revelation of their relationship as father and son.

Almost as if to subtly promote Buddhism, the boy requests for a vegetarian sandwich, and asks Don, "You have any philosophical tips or anything, for a guy on a - kind of - road trip?" After some hesitation, Don rephrases a famous teaching of the Buddha in his own words, "Well, the past is gone, I know that. The future isn't here yet, whatever it's going to be. So, all there is, is this. The present. That's it." When asked if the boy was Buddhist, he replied "I'm not sure yet." Bravo! As Zen master Dogen taught, "Great doubt, great realisation. Little doubt, little realisation. No doubt, no realisation!" And what is life actually, but a road trip too, of a journey of unexpected twists and turns, of lessons missed and learnt. Don's advice was sound advice not just for any road trip but for the trip called life too.

When Don plucks up his courage to ask if he was indeed his son, the boy panicked and ran away, thinking he was crazy - much to Don's dismay. Just then, another boy passes by in a cab, who peers at him intently. We see Don bewildered. Suddenly, Don mind-blowingly realises his son could be some other boy - almost "any" boy in fact! This reminds us of the truth that ultimately we are all family - all kin and kith, interconnected to each other in the many possibilities of various inter-relationships in the countless rounds of rebirths. Who then, does not deserve our "random" kindness as much as our family in this life?

In this closing scene of the movie, it's hard to tell if Don really has some epiphany that will surely alter the rest of his life. We see an expression of great surprise. Suddenly, his words uttered just a while ago rings so very true, applying perfectly to him in this moment - "Well, the past is gone, I know that. The future isn't here yet, whatever it's going to be. So, all there is, is this. The present. That's it." How's your "it"?

Remember this - flowers will be almost always be broken sooner than you expect. What are your flowers? How are they keeping? Are you treasuring them or just attached to them? Instead of hurriedly removing withered flowers from the shrine to replace with fresh ones, as Don in a way did in the past as an unrepentant Casanova, may we reflect on the worth of this moment - it is afterall all that we have - now.