Five years ago this month, the ruling Taliba in Afghanistan blew up the two Bamiyan Buddhas -- one of them more than 50 meters tall and believed to be the world's largest representation of Buddha. The Taliban deemed the effigies offensive to Islam and carried out the destruction despite pleas from leaders around the world -- including UNESCO, the government of neighboring Pakistan and the grand mufti of Egypt. Swiss filmmaker Christian Frei has produced "The Giant Buddhas," a documentary about this great cultural loss and what it says about tolerance and cultural diversity.

WASHINGTON, USA -- The film begins with a scene of stark beauty: the great Bamiyan Valley in remote northeastern Afghanistan. The sky is brittle blue, and the early morning sun makes the cliffs glow like embers. 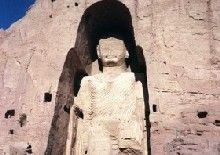 << One of the Bamiyan Buddhas, shortly before it was destroyed in March 2001(epa)

It was here that the Bamiyan Buddhas had stood for more than 1,000 years until the Taliban decided there was no place for them in an Islamist country.

The Long Way Around

But Frei's film doesn't rush immediately to the destruction of the statues. Instead, he takes a leisurely and circuitous route through Qatar, Canada, China, and France in search of what these monumental structures meant to the culture of Afghanistan and the world.

At one point, "The Giant Buddhas" follows the route of a Chinese monk who made a pilgrimage to India 1,400 years ago and stopped in Bamiyan to marvel at the sculptures.

The film also features local Afghans who today are Muslims but who say they are comfortable with the idea that their ancestors were Buddhists.

It travels to China, where entrepreneurs have recreated scale models of the effigies to draw tourists.

But mostly the documentary is about tolerance and intolerance.

While the film focuses on the Taliban's refusal to permit these Buddhist icons on its territory, it also explores accusations that the objections of the outside world were in part to blame for the destruction of the sculptures.

As the film slowly approaches the actual destruction of the statues, it includes excerpts from television news broadcasts of world leaders urging the Taliban to spare the Bamiyan Buddhas.

But perhaps the most eloquent commentary on the demolition was from an unnamed Afghan who lives with his family in a Bamiyan cave, just has his ancestors did before him.

"The Taliban were happy," the man says. "They had destroyed something that could never be rebuilt. It was gone forever. They clapped their hands and jumped around and danced for joy."

The man tells of the trouble the Taliban had trying to destroy the effigies. First, he said, they brought in tanks to open fire with their cannons, but the statues wouldn't fall. They tried dynamite, but that, too, failed.

Finally, the man says, the Taliban enlisted the help of explosives experts from Pakistan and Saudi Arabia. But Frei, the film's director, emphasizes there's no evidence the governments of these two countries were involved in the destruction of the Buddhas.

Not Black And White

"The Giant Buddhas" is 95 minutes long, and the destruction of the statues doesn't come until about 35 minutes into the film. Frei says his work isn't about the destruction, but rather it documents the importance of these Buddhist icons and how they figure in the clash of the Western and Islamic cultures.

Frei says it is right for those outside Afghanistan to be angry about the destruction of the statues. But he argues that, in many cases, the Western reaction was to view all Muslims as being as intolerant as the Taliban.

In fact, Frei says, Islam has many faces. He points to the tolerance of the residents of the Bamiyan Valley, and that of a Sufi, or Islamic mystic, who was interviewed in his film.

"The motivation for me to make a film is always to show that the world is multifaceted and not that simple, not that black and white," Frei said. "Of course, it was an act of ignorance to destroy the Buddhas, but for example in the film I have a Sufi sequence -- you know Sufism? The tolerant Islam. So you get away from the film I think with this information: OK, but it's not all about fundamentalism, in this film there's a lot of beauty."

Information Is The Key

Frei says he hopes his documentary will show audiences around the world -- especially Western audiences -- ways to break out of their cultural shells and realize that they live in a world that is less polarized than they may believe.

"It's always about information," he says. "I think the lack of information leads to preconceptions and stereotypes and ignorance, finally. And the best way to counter it is information and emotion and maybe documentary film, I don't know. I hope so."

"The Giant Buddhas" was presented on March 26 at the National Gallery of Art in Washington. The showing is part of the Environmental Film Festival, which features 100 productions over two weeks in various settings around the American capital.