The Spiritual Liberation of "Nacho Libre"

Singapore -- Warning! This movie has potentially side-splittingly funny scenes. In "Nacho Libre", Nacho (played by Jack Black) is a constantly berated friar and cook in a Mexican monastery, which takes care of orphans. 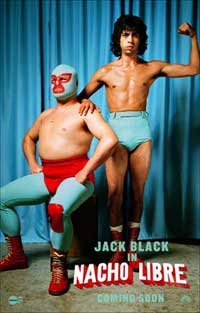 Aspiring to become a professional wrestler since a child, he secretly puts on a mask and cape (yes, with funny stretchy pants too) to follow his dream at night — so as to earn some respect and extra bucks, for better welfare for the children.

However, Nacho's altruistic intentions were not crystal clear at first. Though his first earnings did go to buying good food for the kids, he got more vain for personal fame and gain too. Towards the end, he realised he should fight for the higher cause of being a true role model for the kids. Putting others before him like a Bodhisattva would, he became truly successful.

Knowing that wrestling is frowned upon by the monastery elders, he tries to convince a Sister that wrestling isn't definitely a sin, and manages to do so by winning the grand prize, getting more good food and a bus for the kids. Nacho becomes a hero from zero, in the process learning more about his strengths and weaknesses, much more so than from merely cooking at the monastery.

An obvious moral of the comedy is that we should not follow rules dogmatically or blindly. We should actualise our good intentions mindfully with compassion and wisdom instead. Our intentions are more important than our actions — since they either justify them or not. To religiously stick to the letter of the law stifles the right action that spirituality requires. Thus does Buddhism encourage us to understand the spirit of the Dharma above the letter of it.

“Libre” in Spanish means “the state of being free”. Surely, the wise are free of the delusion that moral rules bind us for the sake of binding us — since they are meant to help free us instead — from everything unskilful, including inappropriate attachment to precepts and practices.