Singapore -- Set in the period of the Five Dynasties and Ten Kingdoms of the 10th century's China, "The Banquet" (Ye Yan) depicts the ever-familiar themes of love and hatred, loyalty and betrayal. Yes, ancient court politics, but nevertheless still so relevant, so long as we are all unenlightened, subject to similar defilements. 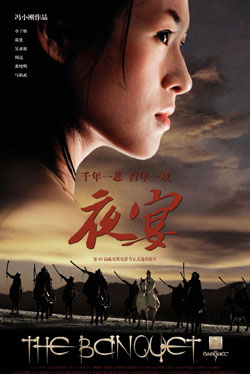 Even the rich and powerful, kings and such, are not free from politicking. In fact, they are probably subject to it on a more devastating scale, that eventually affects the masses they rule over, who have much more stakes to win or lose. With the storyline loosely adapted from Shakespeare's Hamlet, the film feels meditatively theatrical in feel, albeit much more magnificent.

Behind the outward grandeur and opulence lies elaborate deception. While feasting upon the sights and sounds of the lavishly lyrical "banquet", it struck me that seemingly every single movie we make or watch centres around the interplay of the three poisons (greed, hatred and delusion) and their antidotes (generosity, loving-kindness and wisdom).

"The Banquet" is as disturbing as it is intriguing. Disturbing, because it tells of the treachery of the heart, and it is intriguing, because it is also understandable, worthy of empathy. "The Banquet" is also as insightful as it is delusional - as it sheds light on the subtle ignorance we are often subject to. Politics will always thrive, as long as the three poisons are present. A story is a tragedy when we see its protagonists fall victim to the poisons of themselves and others. A story has a happy ending when they triumph over the poisons. And what makes history's heroes great is their personal victory over their defilements, not others'. That said, to fellow Buddhists, the Buddha is surely the peerless hero, who had conquered himself, who had realised non-self for the good of all beings, who selflessly taught us how to realise the same.

As remarked by the Crown Prince (Wu Luan, played by Daniel Wu), the best actors act with emotionless masks on, while being able to convey emotions with their body language. The Empress (played by Zhang Ziyi) retorts that the best actors do not need to wear any masks; their faces are already masks. This signature dialogue marks the nature of "The Banquet", a black "celebration" of cunning lies and deceit. Who is the best actor? The one who who wears a mask, or whose face is a mask? The best actors do not need to mask themselves in any way; they do not even play-act; they "act" as themselves all the time. They are true to themselves and the world.

Despite being set in the macro world of great historical chaos, "The Banquet" is in essence the microcosm of deadly family politics. Seizing the opportunity of the Prince being disillusioned by the politicking ways of the world, who then retreats into a trance-like life lost in the arts of song and dance, the Emperor's brother (played by Ge You) usurps the throne by devious murder, and covets his late Emperor's wife. The secretly reluctant Empress, who is the Prince's stepmother of about the same age, quietly yearns for the Prince's love, while the grieving Prince, who craves for vengeance, fails to reciprocate the love of his fiancée, Qing Nu (played by Zhou Xun), the daughter of the Grand Minister (played by Ma Jingwu).

While the Empress' compromise with the illegitimate Emperor frustrates the Prince, she is equally frustrated that the Prince does not understand her haplessness. The Emperor schemes to murder the Prince and vice versa, climaxing in the titular banquet, where the Prince stages a play to re-enact his father's murder - so as to disclose him. Unbeknownst to him, the Empress had planned to poison the Emperor during the banquet. By an unforseen twist, her toast of wine, spiked with poison, was patronisingly offered to the rebellious Qing Nu by the Emperor instead, who had staged a play to commemorate the Prince, whom she mistaken as murdered, during a journey to fulfil political exchange of hostages, as planned by the Emperor.

Reeling back in horrific disbelief of the Empress' betrayal despite his lavishing of love upon her, the Emperor disappointedly but willingly drinks the poison too, dying broken-hearted in her lap - in an act of desperate repentance. The tragic irony lies in the Emperor losing the love of his life and the Empress losing the person (the Emperor) who loves her truly. At the same time, she gave much anguish to the love of her life (the Prince), for indirectly causing the death of the love of his life (Qing Nu). As he grieves over her death, the Chief Minister's son attempts to stab the Empress to avenge his sister, but the Prince stops the poisoned blade with his hand in time, and dies, thus aggravating the Empress' regret. Simultaneously, the Empress had killed the Minister's son in self-defence. Convoluted politics at its deadliest worst!

Throughout the film, the audience is left ambivalent about the Empress's stance. Is she evil or good? Is she to be blamed or empathised with? Was she a victim of circumstances, or a victimiser who manipulated the circumstances? All of the above perhaps, to varying extents, as she changed from moment to moment. Initially, she had sought only to protect herself, but as the Emperor's suspicions of everyone increases, she decided that the best thing to do was to conspire with the Prince and Chief Minister's son to kill the tyrant Emperor, in the name of avenging the late Emperor, after which she would reign as "King".

Her motivations seemed mixed, probably not very much unlike most of ours, most of the time, as selfishness intertwines with selflessness. In the last scene, as she basks uneasily in her glory, she is struck by a flying knife, by an unseen and unidentified assassin. A final blow - the merciless karmic repercussion of her misgivings. The treacherous naturally attract treacherous enemies. It didn't matter who was it that killed her. She was ultimately her own victim, just like we create the causes of our own suffering too.

On different occasions, the Prince and Empress had sought the deadliest poison to assassinate the Emperor. They asked the seller if what he recommended was indeed the deadliest poison in the world, to which he replied that the human heart is even deadlier. True, since more poisonous than the deadliest poison is the heart or mind set to poison another. But like the Empress's fickle heart, the heart is in reality neutral, empty of any fixed characteristics - it can be for better or worse.

Even as the three poisons to fester in our hearts, we can also transmute them into the antidotes of generosity, loving-kindness and wisdom. Will you let your heart remain poisoned, or will you heal it? Every Shakespearean tragedy subtly asks this question. Do you have the answer yet? The real tragedy would be to miss the moral of the story, to not have the answer.