If no one watches 'Zen' does it make a sound?

Everett, WA (USA) -- A very thin conceit barely fills out the 71 minutes of "Zen Noir," an ultra-low-budget indie with a metaphysical twist. 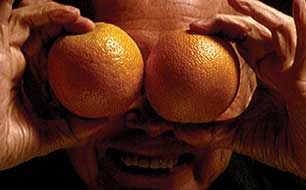 The concept: A hard-boiled private eye goes into a Buddhist monastery to figure out why one of the monks keeled over dead. Of course, the monks have their own way of addressing this question. What is death, after all? Isn't that the bigger question?

The dogged detective, played by Duane Sharp (who looks like a cross between Will Ferrell and Dr. Phil), is not pleased by this response. But he keeps coming back to hear more of what the temple's master (Kim Chan, who also appeared in "Kundun") has to say about the nature of reality.

The detective, who has no name, falls hard for a woman (Debra Miller) with a shaved head. Bugging him throughout the whodunit, and the romance, is the memory of a wife who died young.

All of this makes "Zen Noir" sound like more of a movie than it is. Director Marc Rosenbush merely uses this framework as a way of getting into some basic Buddhist ideas.

For a while, the film trades on a few amusing Zen paradoxes, and the ineffable wisdom of the master. When the detective asks the master about life after death, the master says he doesn't have any idea whether it exists. "Why not?" wonders the detective. "Haven't died yet," says the master.

For a while, one is willing to overlook the nonexistent production values for the sake of a good illustrated lecture; maybe this will be the Buddhist "What the (Bleep) Do We Know?"

But the film doesn't depart enough from its nonexistent story line to do this. The master has one good speech toward the end, about the nature of a simple orange and the amount of life and death it contains.

Other than that, there are quite a few shots of people silently meditating, and a couple of shots of people enjoying some Zen-fueled sex (the glimpses of nudity, though brief, are surprising). This might be enough to please believers, but any other audience will have to be already curious about the sound of one hand clapping.