Singapore -- "A long time ago, in the underground realm, where there are no lies or pain, there lived a Princess who dreamt of the human world. She dreamt of blue skies, soft breeze and sunshine. One day, eluding her keepers, the Princess escaped. Once outside, the brightness blinded her and erased every trace of the past from her memory. She forgot who she was, and where she came from.."

Thus begins the narration for the multiple Academy Award nominated "Pan's Labyrinth", which intricately presents an interweaved maze of the hard facts of adult life and the imaginative fantasy of a child... so it seems - till it becomes more and more difficult to sift reality from fiction as the story progresses. Set in a cold hard Fascist-era Spain and a magical moonlit world, the common factor that binds both dimensions is the horror that both worlds are set in, as seen through the eyes of the young child heroine Ofelia (played by Ivana Baquero). 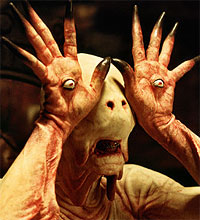 The film juxtaposes the qualities of fear and curiosity, dread and awe, reminding us of how fine it is a line that separates these conflicting emotions. With both the darkness of war and the light of hope, "Pan's Labyrinth" is probably a tale of how unenlightened will always be mixed and mired in contradictions in this adventure called life. Like grimness of real life itself, the story might not be suitable for the faint of heart. Come to think of it, many classic fairy tales are also dark in nature, though children might not have very graphical ideas of violence.

Perhaps, the telling of tales, tall or not, has unconsciously become a time-tested way of getting children to be accustomed for the bleaker aspects of real life? Would we have grown up less courageous and intelligent if we had never heard the tale of the Big Bad Wolf who terrorised the innocent Three Little Pigs? Would we have been less wary of suspicious strangers if we never came to know of the "same" wolf that terrorised Little Red Riding Hood? Hard to tell perhaps, but I honestly think it makes much difference.

Maybe in a mildly perverse way paradoxically mixed with good intentions, adults have been sharing tales of horror with innocent children for generations, while children lap it all up, relishing in them, always eager for more. Most of all, whether we realise it or not, be we adults or children, it is for at least one good archtyepal moral that we crave from each and every story told or heard. It is this lesson that would make it all worthwhile, of how good triumphs over evil despite trials and tribulations.

As in any good fantasy account or a fruitful episode of real life itself, Ofelia takes upon herself a quest of tasks to be fulfilled, so as to prove her worth and safeguard the ones she love, in worlds of both bestial and human monsters. In the tradition of "Alice in Wonderland", she accidentally stumbles into one misadventure after another, which eventually make her all the more kinder and wiser. Perhaps, the audience might see the fantastical aspects in the story as her childish ways of imaginatively reconciling with reality, a means of escapism, which nonetheless helps her to come to terms with the darkness of war and violence in her real life?

Or was it all the substance of dreams? But this doesn't matter as much as the lessons Ofelia do learn. After all, the substance of nightmares is the substance of life, as we dream these very horrors in life itself, even as we sleep. Fantasy or not, what matters more are the real lessons our experiences offer. Perhaps as a response to her helplessness in real life as a child, Ofelia needed a sense of purposefulness - a quest if you will - and this takes place in her world of fairies and fauns. Yet whether we want a quest or not, we are already on one - for we all search for the prize of True Happiness. In Buddhism, we would call that spiritual liberation, aka Enlightenment. On this quest for the Truth, like Ofelia, we each have our own fears to conquer, individual lessons to learn.

Central to the story of Ofelia's quest are the moral dilemmas she face. She realises how life can be contradictory in nature. On one hand, she is chided for not listening to adults' advice, supposedly for her own good. On the other hand, she realises the selfishness that the advice might hide. She struggles between blind submission versus listening to her heart to discern right from wrong. For both her unquestioning obedience and wilful disobedience, she suffers consequences, some horrid and some pleasant. Rebellion for the right cause is as skilful as submission to the wrong cause is unskilful. As film critic Jim Emerson remarked, "An individual conscience: What could be a more powerful anti-fascist weapon than that?" Perhaps, she realised the existential burden of freedom, which grasped properly, shall be that which sets her truly free.

"Innocence has a power evil cannot imagine." So goes the movie tagline. There are two aspects to "spiritual innocence". There is the absolute innocence that comes from being free of the three poisons of evil (greed, hatred and delusion) entirely. And there is the relative innocence that comes not fully understanding the nature of the three poisons. Ofelia triumphs over evil in her innocent ways because she was "fortunately deluded", having fewer notions of what the evil perceived to be "worth" being greedy or hateful over. She thus responded to evil in a way it never expected, and wins. Now, just how truly innocent are you?