"The Illusionist" Is An Illusion

Singapore -- Though "The Ilusionist" is a period story set in Vienna at the turn of the century, its themes are timelessly familiar, dwelling upon love and magic - in terms of the love of magic and the magic of love. Eisenheim (played by Edward Norton) is a deftly skilled stage magician, who was enchanted by his "chance" re-encounter of his lost childhood love. 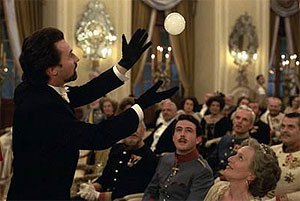 Sophie (played by Jessica Biel) had once before implored him to "Make us disappear!" when they discovered the tragedy that they could not be together - due to differences in social standing. The film tells the story of how Eisenheim eventually pulls off the trick of his life, by making themselves "disappear" from their enemies, so as to unite in the proverbial "happily ever after".

In the show, Eisenheim performs an inexplicable crowd-pulling trick, much to the chagrin of his enemy, who could not solve the mystery of how it worked. This failure to understand how it worked led to much unhappiness. Ironically, the ultimate mystery to solve, be it magical or not, is the mystery of "How to realise True Happiness?" The Buddhist answer of course, is by walking the Noble

Eightfold Path. Solving other mundane mysteries should lead up to solving this big mystery of how to transcend all dissatisfactions of life and death. If not, being caught up in the intrigue of amazing tricks would largely be a waste of time and life. Incidentally, on the note of the amazingly miraculous, the Buddha once commented that the greatest miracle is to transform a fool to a wise person. Now that's universal and practical Dharma magic!

And what should we make go "poof" into thin air, in a wondrous disappearing act? No, not our external enemies, but our internal ones - our inner defilements, which cause us to perceive external enmity out there. The only things truly worth making disappear are our faults of attachment (greed or wanting), aversion (hatred or not-wanting) and delusion (ignorance). When these spiritual poisons disappear from the world, what's left is surely paradise.

Towards the end of the story, the flabbergasted Chief Inspector Uhl (played by Paul Giamatti) utters thus, "Perhaps there is truth in this illusion." Yes, why not? The truth is this is an illusion. "This" being this ilusory world of Samsara that we experience and perceive with the delusion of faulty perceptions. Realise this fully and the truth will set you free. As a grand finale of sorts, Eisenheim pulls his most shocking trick yet, by letting his audience realise that the person assumed to be him onstage was but an elaborate illusion. Yes, the illusionist is an illusion too, reminiscent of the Buddha's teaching that the so-called notion of "self" that we cling to is an illusion, but a mirage, an unsubstantial compound of fluxing mental and material causes and conditions.

We never get to uncover the secrets of how Eisenheim really performed his stage tricks. So how were they done? It doesn't matter really. What's more important about a story about magic are the real down-to-earth lessons of life embedded within. The magic is but cunning garnish for the main dish. As the movie tagline goes, "Nothing is what it seems." True indeed - this statement is true - till we realise enlightenment, when we truly see things as they are in reality. In the mean time, enjoy the magic of life if you will, but don't get too caught up in it, for there's spiritual "magic" to be done by you yet - become enlightened!