Singapore -- The several hundreds of unearthed "Letters from Iwo Jima", which inspired the film, have the wonderful healing effect that a universal peace treaty would have. Reminding us of what is truly precious in life, they show us the heartfelt hopes and fears of otherwise voiceless soldiers, from whom we can never hear again. No, they do not depict any magnificent war epic, but describe the common yearning for harmony instead of hate. 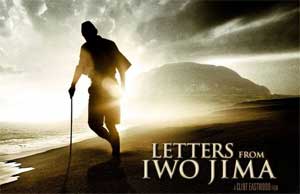 Not about the glory of war, but about the grimness of it all, about how all of humankind is victimised by it alike. Unlike typical war stories, "Letters" humanise instead of demonise the so-called "enemy". It is said that for war to happen, the enemy has to be demonised, for if you humanise him instead, how can you bring yourself to destroy him? The common enemy then, is not each other, but the enmity within us against each other.

The historical battle for Iwo Jima was the first clash between the American and Japanese forces, a pivotal point in the Second World War. The death toll was 20,000 Japanese soldiers and 7,000 American soldiers. Japanese soldiers were deployed to defend the island against invasion towards mainland Japan. In exasperated conversations between the soldiers, one remarks that the island is largely barren, while another chides him for not seeing it as part of their sacred homeland.

One is urged to wonder if it is worth losing lives over lifeless land. If the land is sacred, are the lives that stand upon it not more sacred? What is the point of defending land that becomes burial ground? Another soldier remarks that he would rather have the island sink into the sea. Should it not be greed and hatred, the causes of war, that need to disappear into the abyss instead?

However, we can empathise with the dilemma of needing defence. In war, killing is often for saving more of one's own - as long as one party does not surrender or call for truce. In a poignant letter to his wife, a soldier epitomises the cruel irony of it all - "We soldiers dig. We dig all day. This is the hole that we will fight and die in. Am I digging my own grave?" On the other hand, as crystallised by General Tadamichi Kuribayashi (played by Ken Watanabe) on his rationale for fighting the futile battle destined to fail, "If our children can live safely for one more day it would be worth the one more day that we defend this island." It suddenly strikes the audience that whether a party in war is politically right or wrong, it is surely always right to defend the innocent on both sides. If those currently at war were to focus on this truth, on the many innocents at stake, would there still be war? Why should we victimise each other? There are no winners in war; we all lose.

The paradoxical themes of courage and honour course through the film. What constitutes true courage? Is it desperate suicide or willing surrender? Is it more courageous to live to fight another day, or to kill oneself in despair? Is it braver to face defeat squarely? Or is it more cowardly to do so? Is it more honourable to escape in the hope of retaliating later, or to just wait for death? Is it more right to be a deserter or fighter? For what should we desert or fight a war? Should every patriotic soldier's personal conviction be unquestionably one with that of his nation? What if it is wrong? What are the qualities good soldiers should have? Is it loyalty to one's authorities or one's personal compassion and wisdom? Beyond our official bearings, what are our true duties to humankind?

Coincidentally, in two letters sent by mothers to their soldier sons, one a Japanese and the other an American, they echo similar words of advice - "Do what is right because it's right." Surely, this is right advice. But it also begs the question of what is "right" - which becomes convoluted, especially in the conflict of war. In fact, it is this question, when answered differently, that sparks off war. Both sides are of soldiers born of kindly mothers, who write letters to their families. Both sides are essentially of husbands and sons, each pining for home. The General remarked that the thought of his family makes it ironically hard to die for his family. Perhaps we need to remember we all have families, who do not wish us to die for them. Perhaps we have forgotten that all of humankind is one family in humanity. Perhaps remembering this would end all wars.

When the Japanese soldiers capture an injured American soldier, they were instructed by Baron Nishi (played by Tsuyoshi Ihara) to treat him. Asked by his men as to why he should not be simply killed, the Baron asked if they too would not wish to be treated if caught by the enemy. Since they are unsure of whether they would indeed be treated, why should they not treat him? This is the golden rule of kind reciprocation. As the Buddha put it, "'As I am, so are others; as others are, so am I.' Having thus identified self and others, harm no one nor have them harmed." (Sutta Nipata 705). If we were to all abide by this rule, would there even be war in the first place?

Towards the end of the film is a brief but great equalising scene, as the starring Japanese soldier (played by Kazunari Ninomiya) whose eyes we see the story through, is captured by the Americans. Injured but saved by the "enemy", he is placed upon on a stretcher, laid down side by side within a row of injured American soldiers. We are all humans, all one in pain, which levels us all despite our differences. Life for all is equally short, fragile and precious. Why then should we inflict pain upon each other? Without war, there is already too much pain in the world. Let us heal the wounds of war, and not create new scars. Made for this purpose, "Letters" surely serves this well.

"Letters from Iwo Jima" is in essence not about how a battle was lost, but about how the human spirit of compassion triumphs and shines in its darkest moments. Even if those who embody it had perished, they leave us invaluable lessons of inspiration. Is that not truly honourable and worthwhile? May we honour them, by making and treasuring peace, for the sake of all humanity.

(To learn about the Battle for Iwo Jima from the American perspective, please see the companion "brother" film, "Flags of Our Fathers" by the same director Clint Eastwood).