"The Pursuit of Happyness" in Samsara

Singapore -- Inspired by real life experiences, "The Pursuit of Happyness" is the moving story of Chris Gardner's (played by Academy Award nominee Will Smith) rise from rags to riches - an account of how the human spirit of hope and perseverance can conquer the unexpected hurdles of life. 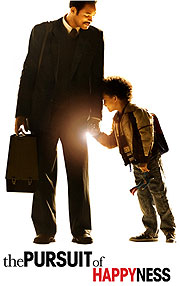 Near the opening of the film, we see Chris drop off his son (played by Jayden Christopher Syre Smith) at a day-care centre, as he laments of how the word "happyness" was spelled wrongly on its wall mural. At this point, one wonders the significance of this - both the spelling and how it came to be the title of the novel from which the film was adapted. We shall see...

Caught up in an economic downturn, coupled with accumulated bills, Chris unwittingly finds himself and his son abandoned by his exhausted wife. Desperate and out of money, he tags his son along, and experiences the life of the homeless by drifting from train stations to cheap motels and shelters. Chris Gardner revealed that what motivated him to strive for a better life was the love for his son. Love for one person can be powerful. Now imagine it multiplied many times over when it transforms into spiritual altruism for the suffering masses. And are we all not already each other's sons and daughters, mothers and fathers in the convoluted web of interdependence and many rounds of rebirth?

We see Chris teaching his son an important lesson - "You got a dream, you gotta protect it. People can't do something themselves, they wanna tell you that you can't do it. You want something? Go get it. Period... Don't ever let someone tell you, you can't do something. Not even me." Sound advice for all aspiring to be Bodhisattvas! Surely, many fellow Buddhists dream of being Bodhisattvas who are able to help countless beings, to guide them towards True Happiness. And surely, even more think this is ridiculous. But what is more worthy of striving after? There is no ideal as powerfully inspiring as that of maxmimising Bodhicitta, the wish to liberate all beings.

Throughout the story, Chris muses upon his pursuit of happiness - "And it was at that time that I thought about Thomas Jefferson writing that Declaration of Independence. Him saying that we have the right to life, liberty, and the pursuit of happiness. And I thought about how he knew to put the 'pursuit' in there, like no one can actually have happiness. We can only pursue it." Interesting. Most of us pursue happiness in its varied guises and assumed embodiments. But do we really get "it"? We see Chris physically running a lot in the film, as he rushes to makes ends meet, banging into one obstacle after another. He must have felt like he was chasing an elusive phantom carrot dangling on a stick before him. Here is the paradox - there is no need to run to grab the carrot. Just be still and hold it here and now. Unenlightened, happiness is a state of mind, conditioned but not determined by the material, but we trick ourselves into thinking otherwise.

"True Happiness" contrasts with worldly happiness. The first is truly lasting, while the latter always fleeting. When we pursue worldly happiness, they will at best come... only to pass in due time. Mountains of wealth cannot buy True Happiness. Fantastic sex is just a brief high. Fame is always at the mercy of blame. Sumptuous meals can only be taken so much... You get the idea. Because worldly happiness is conditioned, it fades away when its conditions fall away. Because True Happiness is unconditioned, it requires nothing in particular to sustain it - though we need to cultivate our spirituality by perfecting our compassion and wisdom to attain it once and for all.

There is a scene of a frowning Chris fiddling with a Rubik Cube, which he only solves partially. This seems like an apt metaphor for the challenges that he later faces. Some predicaments in life might seem impossible to sort out at first, but effort with wisdom can make it possible. Life is somewhat like a Rubik Cube - with multiple sides or aspects to piece together. In the story, Chris labels the significant chapters of his life as "being stupid", "internship" and "happiness". Sounds just like the spiritual path of progressing from delusions to practice and attainment! With forthrightness, great determination and sheer hard work, he finally makes it as a successful millionaire stockbroker.

Chris' son shares a joke with him in the film - "There was a man who was drowning, and a boat came, and the man on the boat said 'Do you need help?' and the man said 'God will save me'. Then another boat came and he tried to help him, but he said 'God will save me', then he drowned and went to Heaven. Then the man told God, 'God, why didn't you save me?' and God said 'I sent you two boats, you dummy!'" A Buddhist version of the joke has it that the man prays to a Bodhisattva for help, while he misses various manifestations of the Bodhisattva in ordinary forms, as he hankers after something extraordinary. Let us be Bodhisattvas then, who deliver each other from suffering by sharing the path to True Happiness. We too can manifest our Bodhicitta as Bodhisattvas do - in ordinary ways. Just as Chris and his son motivate each other, may all motivate all.

Bertrand Russell once said this - "If there were in the world today any large number of people who desired their own happiness more than they desired the unhappiness of others, we could have paradise in a few years." True - but only to a limited extent. The Buddhist perspective is radically different. In the words of Shantideva, "All the suffering in the world arises out of wanting happiness for self. All happiness in the world arises out of wanting happiness for others." Happiness is not just a goal; it should be part of the process too. As Ursula LeQuin put it, "It is good to have an end to journey toward, but it is the journey that matters in the end."

On the deliberate mis-spelling of the title, Chris Gardner philosophically quipped that "The education of your children is everything, and for your children to be educated in a place where the people can't spell happiness ? that represents the ultimate parental failure." Of course, what matters more than academic education is our personal spiritual education - to continually improve our virtues and wisdom. Here's my fancy take on why "happyness" was spelt so - There is no "I" in "happyness", as True Happyness is possible only when we have realised non-self. And since True Happyness is being "happy" in the moment - it should always be an adjective, never a noun! With this brief study on the nature of happiness, may all be well and happy!