San Francisco, CA (USA) -- As a movie, Milarepa transcends “great” and “bad.” Rather: it’s pure magic (and, in the end, transcends even magic - and itself).  In film school, we’re taught film is either documentary or fiction (fact or fantasy; Lumière or Méliès).  But there’s a third element, magic, connecting the dots between magic lantern slides, scriptural woodblock, Tarot cards, and as far back as sacred storytelling by a communal bonfire. 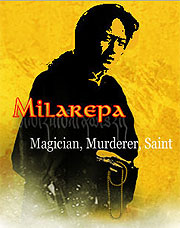 Milarepa rides the steed of magic to bring us sacred medicine: needful antidote for illness of our times. If aliens from outer space visit us, I'm sure they'd be struck by our penchant for violence. Just look at newspapers, where the motto is "If it bleeds, it leads." They'd find more horror there than any single mind could comprehend.

If we try to escape it all by going to a movie theater, we bump into more of the same: Jody Foster's The Brave One, Kevin Bacon's Death Sentence. (Change the names, but the films remain the same.)

No, I doubt Earthlings would be recommended soon for entry into the League of Intergalactic Beings, as we seem quite dangerous to ourselves, hence others. But we'd stand a fair chance if our spokesperson were Milarepa.

Like the Buddha, Milarepa was a real person. His story comes from his own telling, at the request of his students, circa 11th-century Tibet. Today, he’s revered by all the schools of Tibetan Buddhism.   Why is he so great a hero for Tibetans?  Like Guatama, he lived to experience enlightenment. What finer achievement?! But rather than beginning as a super-achiever prince, Milarepa was born lowliest of the low, making his ascent upwards and inwards all the more homely.

With unflinching honesty, his path reflects our worst potential, as well as our best: our un-evolved, instinctual, animal nature, if you will. Milarepa studied magic in order to murder not only the greedy relatives who'd wronged his family, but also the whole town, for siding with the “enemy.” The film centers on this early phase of his life, up to the moment where his life resonates with the Buddha's own life story: the renunciation of the world in quest of the essential meaning of life.

The filmmaker, Lama Neten Chokling, is the revered leader of the Chokgyur Lingpa lineage, with monasteries in both India and Tibet, where Bernardo Bertolucci filmed Little Buddha. Filmgoers might remember him as an actor in The Cup, also filmed at his monastery. Awed by the magnitude of Milarepa's life, he chose to present only his beginnings. (A sequel is in the making.) In so doing, he puts our own times into clear focus, to break the cycles of violence.

Milarepa was filmed in the high altitudes of Spiti Valley, on the border of India and Tibet, still pristine as it ever was. The landscape itself is integral to the film, whose majesty and magic rival any special effects; little wonder it was voted National Geographic Audience Favorite for Best Feature-Length Film.

To ensure authenticity, antiquities and treasures were borrowed from monasteries and villagers' homes. As in a film by Robert J. Flaherty or early Rossellini, or more recently Martin Scorsese's neorealist Kundun, the characters are non-actors, mostly from Lama Chokling's monastery, including his own teacher, plus some of faces from The Cup. (Milarepa is played by the monk who’d played the young boy.)  Even if none are destined for an Oscar, they're all re-enacting a story etched in their very souls, so we're watching acting as essentially a religious performance. (Conversely, is religion a form of performance art?)

Cinema has revealed to us the redemption of other rogues, such as Robert Bresson's miraculous Pickpocket (another movie with all nonactors). But here the material isn't original. True, at times it might slowly creep, like a passage from Deuteronomy. But it accumulates an undeniable force, rivaling Milarepa's own harnessing of elemental powers.

The Bible isn't a bad analogue here, where small details can be enormously moving, such as the 80-year-old woman who wanders onto the climactic scene and witnesses Milarepa's revenge. (The woman was in real life a follower of Chokling’s own teacher, and so frail they had to carry her in. But when her moment came, she shed real tears.)

The viewer is, thankfully, not bludgeoned with the significance of what is seen. And there is tender subtlety in what is not seen, as well. We're left to intuit conversations that have taken place, for instance, without having seen them laid out before our eyes, adding to the film's resonance.

Today, we're more likely moved by the singer not the song, but in Milarepa the story itself, and the filmmakers' devotion to it, is the dynamo. On the level of Hollywood, which is to say perhaps the lowest common dominator, it's a welcome antidote to the all-too-familiar media toxins of anger, fear, and greed; common manifestations of our human ignorance of What Is.

Milarepa transcends, to touch our hearts, kindling the aspiration for tolerance and compassion, so necessary if we are ever to lead a genuine life.

Milarepa? Just change the names, and the story is about us.