A Tasty Road to Enlightenment

New York, USA -- A jaunty mix of chanting, baking and spiritual uplift, “How to Cook Your Life” introduces us to the cooking classes of Edward Espe Brown, a twinkling Zen priest and vegetarian chef. 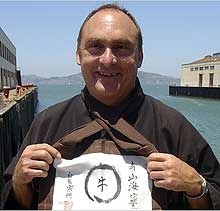 << Edward Espe Brown in "How To Cook Your Life."

Refreshingly straightforward and free of narration, the documentary observes Mr. Brown at several of the Buddhist centers — including the Tassajara Zen Mountain Center in California — where he offers students his patented blend of recipes and meditation.

Dough-kneading techniques are enlivened by homilies from his mentor Suzuki Roshi (who died in 1971 and whose beaming countenance is captured in snippets of old black-and-white film) and punctuated by Mr. Brown’s frequent, throaty chuckles.

Identifying each section with a chipper, produce-theme title card, the director, Doris Dörrie, occasionally succumbs to clichéd symbolism, as when a flickering barrage of television channels exemplifies the frantic pace of modern life.

And while a glancing critique of society’s wastefulness — illustrated most vividly by a Dumpster-diving woman with no need for a grocery budget — is mildly entertaining, it only distracts from the film’s greatest asset: Mr. Brown’s personality.

Neither smug nor saintly, “How to Cook Your Life” presents a man humbled by unruly emotions. As he flares with anger over tardily cooked spinach or tears up at the memory of a battered teapot, his road to enlightenment seems as rocky as our own.

“How to Cook Your Life” is rated PG-13 (Parents strongly cautioned). It has a little bad language and a lot of good vibes.

HOW TO COOK YOUR LIFE