A "Hitman" Struck by Compassion

Sinagpore -- The movie "Hitman" begins with the haunting classical track of "Ave Maria", hinting of a pseudo-sacred secret organisation, which, according to the trailer, does the "necessary evil" of taking out the evil. 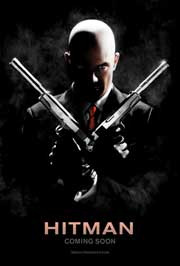 This nameless agency mercilessly renders unwanted orphans into nameless professional killers. Brought up with their shaven heads like pseudo-monks, their extremely ascetic and disposable lives are ultimately used for disposing other lives.

Some might occasionally fantasise about being a hitman, being able to "hit" enemies, and not run, but walk away coolly - and get paid handsomely for doing so! But even if you are a professional hitman, you are still liable to be hit by other professional hitmen, including those from the organisation you are from, or the one who hired you, or even the police! A life that disposes lives is usually seen as "disposable". Karmic retribution can ripen in time too.

The protagonist hitman called nothing more than "No. 47" realises that the agency that so "kindly" brought him up also deviously set him up in an intricate play of corrupted politics. His latest hits turn out to be "unholy" in every sense of the word. He asks a good cop the interesting question of how he decides who should be killed - for he is at a loss too, having realised that he had all along blindly followed instructions of a murderous order.

With training like an overly uptight monastery, the agency was no blessed institue. It was prison for both body and mind; for brainwashing instead of spiritual liberation. Awakened, he decides to take out this "unnecessary evil" instead... unfortunately, with much bloodshed. Killing should be the very last resort, while awakening of oneself and others should take top priority. It would be great if films feature more skilful ways of subduing killers without killing.

Used to being treated as a sex object subjected to violence, a girl who was saved by No. 47 quips, "So you don't want to f*ck me, and you don't want to kill me. I don't think I've ever felt so much indifference in my life!" Indeed, No. 47 learns to be less cold-blooded and more genuinely humane. Neither forced sex nor violence were really on his mind. He saves her from her tortured life instead, becoming her nameless personal "Bodhisattva".

In a paradoxical way, "Hitman" glamourises violence while denouncing it. No. 47 never really relished in killing, though he set on a war to end his personal wars. With impending rebounding effects of karma, it would be arguable whether his method would really work in real life. Non-violent righteousness would be ideal. As the Buddha urged in the Dhammapada, "Arise! Do not be heedless! Lead a righteous life. The righteous live happily, both in this world and the next."