Singapore -- Outgrossing the opening weekend box office of "An Inconvenient Truth" and "March of the Penguins", "Sharkwater" is the labour of love of biologist and investigative reporter Rob Stewart, who undertook the dangerous mission of trailing the multi-billion dollar shark fin trade. 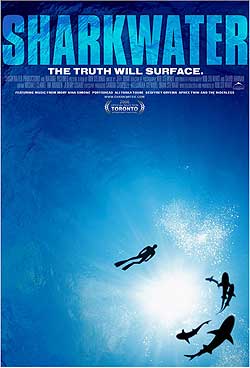 Stewart literally risks "life and limb" in the process. This true-life documentary, which was made over five years in 15 countries, highlights the existence of corrupted governance and mafia rings in the industry. More importantly, it calls to attention the plight of the seas through the shark - one of the world’s most misunderstood animals. Stunningly filmed, this multiple award-winning film features invaluable lessons on the intricate balance and beauty of nature, and the urgency of safeguarding it.

Lest it be mistaken that this is another "monster" movie about sharks, nothing could be further from the truth. This is probably the greatest shark documentary in our time, which hopes to undo the horrific demonisation of sharks - that the famed "Jaws" trilogy and its many successors have popularised. As Stonepeace said, "One who demonises others demonises oneself." Sharks, as they turn out to be, are among the most important animals in the world. While there are only about 5 fatal cases of death by shark attack annually, there are about 100 deaths from elephant and tiger attacks. While sharks hardly bite humans, humans bite into every consumable meat they can find!

Whales too, had been "classically" demonised by the fictitious "Moby Dick". Relect deeper and you will realise how humans have baseless prejudice towards virtually every animal that we continually exploit and consume. As the film suggests, we like to have a monster in our midst... but we are already the monstrous ones among ourselves.

It is an often overlooked fact, that the great oceans, which make up two-thirds of the Earth's surface while being home to 80% of the planet's lifeforms, is the planet's most important ecosystem. Noteworthy too is that life began in the seas. Land life is thus dependent on the seas. Other than pollution being a source of destruction of ocean life, the more direct destruction would be the ongoing legalised overfishing of the world's major fishing seas. Worse than that, is illegal fishing that goes unchecked. By the time one finished watching the 89 minute film, some 1500 sharks would had been killed. The senseless definning and slaughter of sharks is also featured - for good reason. As Stonepeace put it, "The sight of blood and gore is only good for one thing - to prevent further blood and gore."

Why do sharks matter at all, you might wonder. From an interview with Stewart (http://www.emagazine.com/view/?3890&printview&imagesoff&src=QHA143) - "Phytoplankton (tiny plants) in the oceans provide 70% of the oxygen in our atmosphere, and are the greatest sink for carbon dioxide on earth. We’re now destroying the oceans, removing apex predators such as sharks, dredging the oceans; without considering that this atmosphere, our precious oxygen, and our hospitable planet, is all made possible because of life in the ocean that is part of a food chain. Food chains are sensitive, have taken hundreds of millions or billions of years to form, and we’re destroying it." Killing sharks can hasten global warming and its connected climatic crises - which leads to our doom.

Like every other animal upon closer look, sharks are truly amazing, mysterious and beautiful creatures. They have existed for more than 400 million years - even before the dinosaurs, and survived five major periods of extinction... before being cruelly decimated by more than 90% today - by recently "evolved" humans. Surely, humanity's humanity needs to evolve even further. Sharks are mainly killed for their fins. The ironical truth is that the fins, which are seasoned by chicken and such, are tasteless and void of health benefits by themselves. With prevalent sea pollution, seafood is more likely to cause disease! Instead of being a status symbol, the savouring of shark fin soup is an ignorant "ritual"!

Featured too are the heroic painstaking efforts of "The Sea Shepherd Conservation Society" - whose voluntary watchmen look over troubled waters - where marine life is fished illegally. Truly ecologically conscious and walking the walk, all the "shepherds" are vegan. As the Captain Paul Watson says (from http://www.animalsaustralia.org/media/opinion.php?op=42) - "Why did Al Gore's film Inconvenient Truth not mention the inconvenient truth that the slaughter industry creates more greenhouse gases than the automobile industry?... There is not enough fish in the world's oceans to feed 6.6 billion human beings and another 10 billion domestic animals. That is why all the world's commercial fisheries are collapsing...

Humans are not and have never been carnivores. A lion is a carnivore as is a wolf, as is a tiger, or a shark. Carnivores eat live animals. They stalk them, they run them down, they pounce, they kill, and they eat, blood dripping, meat at body temperature. Nature, brutal red in tooth and claw. I've never met a human that can do that. Yes we found ways to run down animals and kill them. In fact we've come to be rather efficient at the killing part. But we can't eat the prey until we cut it up and cook it and that usually involves some time between kill and eating."

Stewart is vegetarian too. From the emagazine.com interview, "Yes, I’m a vegetarian for a number of reasons. Eating animals requires [at least] ten times the resources and drain on the planet than eating plants. I’m already incredibly privileged, and don’t think I should drain more of the planet, especially considering 8 million people die of starvation every year. There are also numerous health benefits, and it greatly reduces the chances of disease, especially the number one killers such as heart disease, stroke, cancers, etc. I also really appreciate animals, and I’m happier living with non-violence."

Echoing the urgency of saving the planet from ourselves and the truth of interconnectedness, even His Holiness the 14th Dalai Lama offered a message of support for the "Sea Shepherds" (from http://www.seashepherd.org/supporters/featured_0703_Dalai_Lama.html) - "I am happy to lend my support to those who, like the volunteers of the SSCS, seek to protect our oceans and our fellow creatures... And it is my hope that through understanding the interdependence of the world and all the beings that live in it, people will adapt their behaviour in such ways that the potential of our bounteous natural realm be nurtured and restored."

The end of the film urges viewers to visit www.SavingSharks.com. If you're not planning to watch the film, please visit to see how you can save the sharks, which is to save the planet too!