"This Film is Not Yet Rated" for Sex & Violence?

Singapore -- Rated differently in various countries and banned in at least one, "This Film is Not Yet Rated" surrendered its rating (NC-17: no children under 17, for some graphic sexual content) in the country it was made. This was to rebel against the stigma of being unfairly classified. 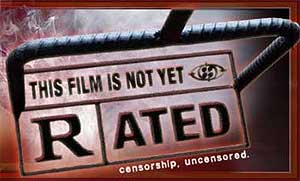 Thus, the movie was screened uncut. It might as well be called "This Film is Not Rated!" The varying stances which somewhat "censor" this uncensored film from non-uniform age groups across the world is ironic yet apt - because the film is about the complex and subjective nature of censorship. As the tagline describes it succinctly, it is about "censorship, uncensored".

Academy Award nominated director Kirby Dick (who got this film nominated for the 2007 Critics' Choice Award and GLADD Media Award) attempted an exposé about the American movie ratings board (MPAA: Motion Picture Association of America). In the process, he highlights phenomena that is as frustrating (to filmmakers) as it is amusing (to viewers of this film). Sometimes, an intelligent and widely publicised mockumentary, which is the marriage of onscreen wit and wisdom, is the best way to vent, and to improve the state of things.

The ratings board is supposedly the moral guardian of cinema goers, yet it was discovered to exhibit "arbitrary parenthood" - with "consistent inconsistencies" in rating films. Surely, this itself cannot be very moral? For instance, independent filmmakers lament of how easy it is for big Hollywood movie companies to have their films with loads of violence rated viewable for wider audiences than theirs, which have non-exploitative sex scenes crucial to their often educational storylines. Not that it should be encouraged, the truth is that many youngsters are already over-exposed to "unhealthy" portrayals of sex via the net these days - before learning about sex in school. Better then, to educate early, than to "ban" them young.

Yes, sex sells. But violence does too - better, so it seems - according to the dynamics of the movie industry and its rating system. It is as if it is better to expose the young to mindless violence (as depicted in many blockbuster action films), than to normal (okay, sometimes dramatised) scenes of making love. Does this hint of the combined but contradicting desires to milk more money from the young, while appearing to uphold politically or religiously "correct" and "conservative" values? But how "correct" or "conservative" can being trigger-happy be? Do films influence more teen crimes of sex or violence? Is enough done to halt them?

The truth is, sex is a part of life (if one does not decide to be celibate), while violence should not play a part in anyone's life. In most good films depicting sex, its consequences are also portrayed realistically (e.g. having un/expected pregnancies or contracting disease), while violent scenes seem mostly conveniently and inconsequentially "bloodless". You must have seen this a hundred times - of "heroes" shooting 'em all before walking away unscathed. There are just too few films (such as the outstanding "Saving Private Ryan"), which accurately show the blood and gore of "real life", and the horror and pain from gunfire... thus de-glorifying violence.

Ironically, an independent filmmaker's work on the raw violence of real war was rated "badly". He remarks that one cannot rate reality - for it is as it is. If we detest a real life documentary on war, we should not start any war. Excellent point! And if we make war, we ought to see it as it is, instead of pretending its dark side being non-existent. Once again, this is not to glorify violence, but to see it as it is, with flaws and all - to urge all to give peace a chance. In the bid to over-protect children (but aren't those aged near 17 already teenagers?), their growth to become mature thinking adults might be stunted.

Seemingly subjected to a bunch of unofficial but obvious discriminations, the ratings board had been working in "mysterious ways" for many years, playing "God" through the "ghosts" of its members, who represent supposedly "average" parents. Their identities are kept top secret - so that they would not be pressurised or influenced by members of the public - all while big players in the movie industry talk to them, who in turn are "advised" by two members of the Christian clergy, with no other faiths represented. How fair can this be? The board is rarely specific about their "grievances" about a film, being vague most of the time. Who watches the watchmen (and women)? Since no one does, Dick turns the discerning objective lens of the camera on them to investigate. Why not question the questionable? In the Kalama Sutta, the Buddha too urged doubting of the doubtful.

Filmmakers risk offending this "fascist" almighty "God" (that is the board, which does not fully practises what it preaches - e.g. its membership policies), while not having the basic right of free enquiry to reason amicably with "him". This absent "God" simply does not entertain reasonable questions, much less to give reasonable answers. When "his" inconsistencies in verdicts are disclosed upon comparing ratings of past films, some of which were rated more liberally despite being more potentially "offensive" than the film sent for rating, the rebuttal is that no comparison is allowed. In other words, just accept illogical dogma and non-justice - trust with total faith that it's "God's" will!

Dick was indeed brave to make this film. Probably initially seen as the public enemy of the board, he was nevertheless heroic in challenging the system - not to remove it, but to improve it. As a filmmaker, his stakes were high - higher than movie-goers'! The film was first screened in early 2006. Did it have any positive impact? Yes indeed. According to imdb.com - "The MPAA announced that starting in March of 2007, it will change their policy and allow filmmakers to cite other film's ratings as comparison. The MPAA will also provide information about the demographics of its board." Will such comparison, with its own ratings, lead to a more dogmatically defensive closed system, or to a more objectively self-reflective open system? Just keep watching!