Singapore -- As the film title suggests, "10,000 B.C." is an imagined prehistoric tale... not just about a lesser uncivilised and thus "godless" time, but also about how superstitions about what constituted the godly came into being, of the tendency to either demonise or deify the ferocious or unfamiliar. 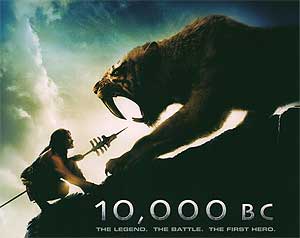 Surely, prehistory, which is unfortunately not recorded, and thus not learnt, offers many valuable lessons for humankind. However, even the recorded annals of our dark history are doomed to repeat – should we forget past mistakes. (For the fascinating Buddhist perspective on the "evolution" of humankind, reading the Aganna Sutta is a must.)

The story tells of the tension between savagery and civilisation, when the line between the human and the animal seemed less clearly demarcated. The humans were clearly more ambitious though – for both good and evil reasons. While the wild beasts cast a constant spectre of fear over humans, humans also attempt to hunt them for food, and to enslave and domesticate them as beasts of burden. It's the origin of the love-hate master-servant relationship between man and beast. How humans mistreated animals also reflected how some humans treated one another too – via slavery, theft, arson and rape.

There is an alternative relationship though – a harmonious one, where humans and animals respect one another. This was reflected in the hero's (played by Steven Strait) rescue of a ferocious sabre-toothed tiger, with the leap of faith that there would be gratitude, that he would not be killed for his kindness. The tiger in turn saves him later, demonstrating the righteous loyalty that even animals are capable of. This puts humans to shame, for those who lack such humanity might not even match the values of the non-human.

The hero's connection with the tiger is reminiscent of the Buddha's (circa 563 B.C. to 483 B.C.) encounter with the intoxicated and maddened elephant Nalagiri. Sent to stampede his way towards the Buddha, the Buddha calmly communicated with him non-verbally, by radiating the universal language of Metta (loving-kindness). Metta can soothe the wildest beasts! If so, when we lack Metta when dealing with one another, are we not bestial or worse than beasts?

The rising of the hero was "foretold" by an oracle. It is easy to imagine how many saviours have been anticipated and proclaimed throughout history, as it is only natural for humans to want hope, to see the need for all-redeeming heroes. To some extent, such prophecies must then be self-fulfilling ones. Given enough time, heroes do arise in history. The hero was unsure as he was filled with self-doubt - about his ability to muster selfless courage. Interestingly, Buddhists see the Buddha as a genuine hero, for not only did he realise supreme spiritual confidence, becoming a "teacher of humans and gods", he realised the truth of non-self. Selflessness is a mark of true heroes!

More than the proposing the origin of conflict over food, wealth, power and sex via the influence of greed, hatred and delusion, the film also illustrates how racism probably arose – when foreign cultures meet and clash. Distrust easily arises. Yet, given enough patience, effort and wisdom, it can give way to trust too – as brotherhoods formed with the alignment of tribal allies against common enemies. As the leader of a tribe suggested, the great draw a wider circle to serve and protect more – beyond one's small circle of family and friends. Now… if only the conflicting nations of the world today draw a circle around the Earth together!

Some prehistoric humans were portrayed to be primarily and instinctually hunters, though this is arguable – since we see them foolishly waiting for mammoths to run into their traps, while hoping they would not first die of starvation. It is much more likely that the first humans were natural scavenging vegetarians (fruitarians especially), which would require much less efforts than being carnivorous hunters in need of much weaponry and planning to fill one's stomach. Why hunt when you can harvest and farm? The same group of humans were later presented a bag of seeds by another tribe. Thus began the age of agriculture? It is hard to think humans are more civilised in modern day in terms of animal welfare - since unnecessary greed for meat maintains machines for mechanised breeding and slaughter of animals.

In the final showdown to free enslaved humans and animals, a false and cruel god initially regarded as "the Almighty" was "sacrificed" by the masses for the greater good. Proved to be all too human, with weaknesses and all, the "god's" rule was overthrown, signifying the beginning of a new age of spiritual freedom from superstition. Of course, new gods arose in time to replace fallen ones, just as new ones have replaced the Greek gods of Olympus. On the origin of the gods in human history, Buddhism has some enlightening views. Here are excerpts from the article "Are Buddhists Atheists?" (http://www.moonpointer.com/index.php?itemid=659) on the subject -

"However, Buddhism explains how theism evolved through history, and it is from this that we can see how Buddhism sees itself in comparison. In the ancient days of lack in understanding of nature, when humans experienced the wrath of nature, they instinctively assumed there to be gods of nature who were angry with them. Thus arose belief in earth gods (who created earthquakes), mountain gods (who created landslides), river gods (who created floods), lightning gods (who created lightning storms)... This is probably birth of polytheism. Some time later, it occurred to humans that these myriad gods should be under the control of a supreme God who created and governed them, without which there would be total chaos. This is the birth of monotheism.

"With the coming of Buddhism and its above understanding, none of the gods or God were taken as spiritual refuges, as the Buddha's complete awakening to the reality of life, the universe and everything clarified the earlier (mis)understanding of the nature of gods. But this is not to say no gods exist at all. In fact, in Buddhist cosmology, there are 26 intricately defined heavenly planes among its 31 planes of existence. The inhabitants of the heavens are of course, gods. And anyone who had created sufficient good karma can be reborn as a god, though a godly rebirth is not Buddhism's final aim. Its final aim is to urge all to become Buddhas - ones who have realised total freedom from the rounds of life and death."