Singapore -- A spin-off movie from the "Death Note" series, "L" is not about sacrificing others through the deadly notebook (which supernaturally causes the death of those whose names are written in it); but about self-sacrifice for others instead. 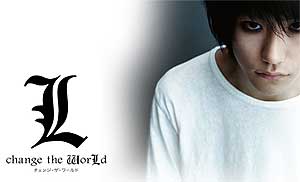 It might as well be called "Life Note"! The anti-hero is the kooky yet amiable L, seemingly but one of a series of "Bodhisattva-like" characters codenamed with letters of the alphabet. In the "Death Note" series, the one who used it to execute those deemed punishable by death was called "Light", though his sense of justice was dark. Ironically, L looks somewhat deathly and sinister, though his sense of true justice is clearly forgiving and life-affirming. A case which reminds us not to judge a person by the appearance!

L's mentor was W, who had a vision of changing the world into a better place. His ideology was misread to the extreme by his disciple - the eco-terrorist K, who was bent on destroying all humankind, whom she saw as a virus-like threat to the planet, that wrecks war among one another and chaos upon the environment.

While this is somewhat true, doesn't her view make her the worst enemy of humankind? Why not seek harmonious co-existence instead of mass-suicide? The planet would become essentially useless to every sentient being if they are all destroyed. Transformation by "reformation" is the cure; not annihilation. We need to save ourselves from ourselves! If we all simply die, what is point of it all? For whom would we be making the world a "better" place for?

Ultimately, humans are not the viral problem; it is our defilements which create problems that is. What needed was to eradicate the causes of suffering in the human condition; not to eradicate those suffering from the human condition! The right sacrifice is to relinquish our defilements, not the defiled. A girl in the story happened to carry both the virus and cure in her body. Indeed... if we are the viral disease collectively, we need to be the viral cure collectively too. This cure is the positive viral effect of compassion and wisdom. While individuals can create personal karma to better their lives, individuals in society can create collective karma to better the planet's condition too.

L had earlier written his impending "peaceful death" in the Death Note, in a final bid to outwit Light by rendering himself invincible for 23 days while zooming in on him. The deathwish for himself was a "lifewish" for others. Having succeeded, he spent his last days tackling the new case above. We might be able to cheat death temporarily, by creating radically different karma by our chosen course of action, but we cannot win death - unless we break free from the cycle of birth and death - via enlightenment! Meanwhile, unlike L's case, our contract with death is never cast in stone. In fact, our appointment with death morphs with our shape-shifting karma moulded by us. Thus, our appointment is unknown, though we can choose to lead purposeful lives, like L did. Even his planned demise was meaningful!

Due to his selfless nature, L saw his impending death as but a small sacrifice for humankind. Though an eccentric anti-hero, he is nevertheless focused and heroic. Crooked in posture, his altrusitic motivations are however upright as can be. While such characters are usually portrayed to be egoistic geniuses, L reminds us that "No matter how gifted you are, you alone cannot change the world." While individuals can start change, the world is needed to change the world - due to the nature of interdependence. Other than his craving for sweet snacks, it was as if L lived each day only to save the day - for others. L's calm demeanour shows no sign of attachment to life, just as there was no aversion to death. He treasures his life though, for he knew it could always be put to good use.

A trailer for the film suggested it to present "the real god of death". Skilfully manipulating death as he did, while being fearless of death, it is L! For Buddhists, the Buddha would be the one who triumphed over life and death. (The name of Mara, the demonic evil one, also personifies death.) L dies the quiet unglamorous death that he wished for. His character and deeds helped to shape the peaceful nature of his death too. It's not unlike the way karma would work. As such, we live the self-fulfilling prophecies we create and abide by. Living in secrecy as the world's greatest detective, L might have had a thankless job, though undeniable gladness arises from his personal knowledge that he has always done his best to solve every criminal case, in his bid to help purify the world of evil. His passing was indeed a happy ending!