British Columbia, Canada -- This event is cosponsored by the Williams Lake chapter of Amnesty International and the local Tibetan Buddhist group Gendun Drubpa. These groups have joined together in bringing the award winning movie "10 Questions for the Dalai Lama" to Williams Lake on Friday May 30 at 7 p.m. in the Gibraltar Room. 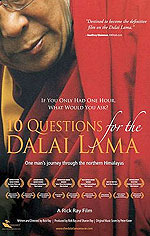 Critics have said of this film “luscious cinematography and awe inspiring humanity” Boston Herald and the Daily Texan has said: “ it is well worth going to see this movie. The film is beautifully made…offers a lifetime’s worth of insight and information.”

This event is designed to provide an opportunity for individuals of different faiths and those who consider themselves spiritual but not religious to join together with a common interest of compassion and respect for others.

This movie weaves together the filmmaker’s travels through India, some rare historical footage and footage supplied by individuals who at great personal risk, filmed with hidden cameras within Tibet. This movie shares a rare personal conversation with the Dalai Lama asking some fundamental questions of our time such as … How do you reconcile a commitment to non-violence when faced with violence?

This Nobel Peace Prize winner and Honorary Canadian Citizen, the Dalai Lama has said “To meet the challenge of our times, human beings will have to develop a greater sense of universal responsibility. Each of us must learn to work not just for his or her own self, family or nation, but for the benefit of all.”

Too often, we are defined by our differences instead of our similarities. The Dalai Lama embraces the concept that all different traditions and philosophies, both Eastern and Western exist to meet the needs of different individuals. We all seek happiness and inner peace. Too often, we see that our way is the only way.

As our outer world is shrinking and we are becoming increasingly interdependent, we need to work on our inner world and practice more compassion and understanding bringing us inner strength, calmness and less fear.

We are increasingly hearing more about the connection between happiness and health our mind body connection.

The Dalai Lama Center for Peace and Education which is being built in Vancouver has no religious or political affiliations.

It will promote peace through education, personal transformation and dialogue. The Dalai Lama believes that vital sustainable communities depend upon many individual acts of compassion and helpfulness.

The greatest obstacles to inner peace are our disturbing emotions such as anger, attachment fear and suspicion, while love and compassion and a sense of universal responsibility are the sources of peace and happiness.

Gendun Drubpa Buddhist Center will be starting construction of a Stupa Project for World Peace and Environmental Harmony this summer. Venerable Patricia Devoe has recently moved to the Cariboo from Scotland to oversee this project.

When completed in several years, this project will be open for all to visit and receive it’s healing benefits.

Admission to the film May 30 is $10 at the Gibraltar Room door.