Singapore -- "12 Lotus" is the name of a poignant song in 12 chapters, which also narrates the troubled life and times of a girl called Lotus (Lianhua). Since young, she wished to sing the song to Guanyin (Avalokiteshvara) Bodhisattva - out of gratitude perhaps, for she was the beacon of hope in her life, to whom she would pour all her woes. 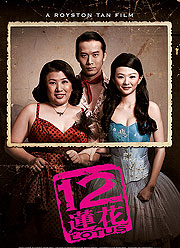 While children hug dolls, she steals and cradles a Guanyin image for comfort. Though without a mother, she mothers the image instead, while seeing Guanyin as her surrogate spiritual mother (Guanyinma). In this way, Guanyin, who personifies perfect compassion, somehow helped to ease her blues.

Repeated in the film is this ominous refrain - "Without love, there is no pain. Without pain, there is no love." A paradox? Yes, but a true one - when it comes to worldly love. Lianhua's cruel father utters this while he canes her during singing lessons. Tough love? As we learn later, it was mostly loveless punishment. There is pain when there is "love" with (failed) expectations, though this implies there is "love" when there is pain too. Like the pure lotus, which grows surrounded by the mud of defilements while blossoming untainted, Lianhua is resilient, and grows up to be a successful singer.

With Guanyin playing a central but silent role in the story, the recurring scenes of Lianhua physically (and mentally) clinging to the Guanyin image begs the question of whether all her prayers went unheard, in vain. Was her faith arbitrary? Not really - as the audience can easily imagine how much worse Lianhua might be without her refuge in Guanyin. Her faith might lack wisdom perhaps, but it is faith nonetheless. Guanyin's name in full (Guanshiyin Pusa) means the "Bodhisattva who hears (regards) the sounds (cries) of the world". What Lianhua probably forgot was to heed her own inner Guanyin, to listen to her heart with more compassion.

But was Guanyin truly absent in her efforts to help Lianhua? For help to be rendered, there must be enough karmic affinity. This surely, Lianhua had? Perhaps it wasn't focused enough to connect. As stated in chapter 25 (The Universal Door of Guanshiyin Bodhisattva) of the Lotus Sutra - "... if any of the limitless hundreds of thousands of myriads of kotis [a huge unit] of living beings who are undergoing all kinds of suffering hear of Guanshiyin Bodhisattva and recite his [her] name single-mindedly, Guanshiyin Bodhisattva will immediately hear their voices and rescue them." Sadly, Lianhua's mind was more scattered than single-minded.

Inspired by a real life incident, there is a scene where the deeply disturbed Lianhua holds on to her Guanyin image and falls asleep. When she awakes, she discovers the head broken. In distraught desperation to "save the saviour", she runs onto the streets to find someone to "heal" her. Someone eventually helps to repair the image. Related, is a somewhat controversial scene, where Lianhua visits a salon to wash the Guanyin image's "hair". While some might see this as a tasteless or blasphemous "joke", "Guanyin" smiles on gently and compassionately, seemingly with acceptance and understanding of Lianhua's plight.

If Guanyin really resided within the image, would she mind? Probably not - for Lianhua was sincere, albeit not in her perfectly right frame of mind. The hairdresser played along too, without laughing at her. Perhaps, Guanyin miraculously manifested the breaking of the head, so as to urge the traumatised and reclusive Lianhua to step outside her house. Perhaps, the ones who eased her mind by repairing and washing the image were Bodhisattvas in disguise too. Perhaps, the boy whom Lianhua nurtured since young, who cared for her in return, was a Bodhisattva too. Perhaps, Guanyin already manifested in many ways for Lianhua.

Perhaps Lianhua did not so much believe in Guanyin to be her Bodhisattva, as much as she yearned for her lost lover to be her "personal Bodhisattva". The greater significance of Guanyin's teachings is that instead of only pleading to Bodhisattvas for help, we should aspire to be Bodhisattvas too, by entering the universal door of compassion, by aspiring to be like Guanyin, whose doors of her heart open to all universally. Tragically, Lianhua had forgotten to be a Bodhisattva to herself, to love herself well, while she pined for love from a heartless lover. May Lianhua's compassion for herself and others blossom like the lotus!