The Keeper of 'My Sister's Keeper' is My Sister

Singapore -- In the poignant but touching story of ‘My Sister’s Keeper’, a young girl realises that she was conceived specifically to save her older sister’s life. She decides to sue her parents for ‘medical emancipation’ – to reject any further bodily donations, so that she can live her life fully, in a carefree manner. Now that sounds fair, but she does love her sister too. 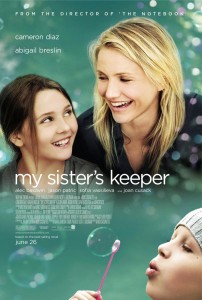 Why then, does she make such a decision, and what would you do if you were their parents? What if her remaining kidney fails after donating one to her sister? A koan with real ethical dilemmas indeed! On the parents’ part, is it unfair favourtism or is it perfectly understandable choicelessness to hope one child can save another despite some risk? Is it conditional or unconditional love? For which child?

‘How long?’ A parent asks the doctor on the time left for the older sister. ‘Hard to say.’ Isn’t this the story of our lives? Even if we are in the pink of health, it is also hard to say how long more we have. The mortality of us all is well reflected in a dialogue between two young cancer-stricken lovers. When she vomits as a side effect of chemotherapy, she says, ‘I’m sorry.’ He replies, ‘What are you talking about? Tomorrow it could be me.’ Samsarically, once born, we are all sick and dying ‘lovers’, enemies… or strangers to one another. That we will all die, should the parents be more protective out of love? But what if they become over-protective, such that the child cannot live fully? What is the Midde Path of love? To seek the answer is to walk the Bodhisattva path.

The younger sister believed that most babies are conceived accidentally, and could not understand why her sister had to die. Whether one believes in karma and rebirth or not, surely, life and death is never by chance, but due to the coming together of many complex conditions. When her sister passes away before she could be saved, she realised she wasn’t born to save her, but to experience the love of her sister.

Out of love, the older sister had asked her to live her life fully in spite of her. Having sacrificed so much for her since little, she had decided to ‘liberate’ her, even if she had to die. The truth is, we are not destined for anything in particular, other than what we choose. We have no obligations to be any person’s keeper, but we are all free to love and save one another. If so, why don’t we open our hearts, to do our best to be one another’s spiritual keepers?
TOP