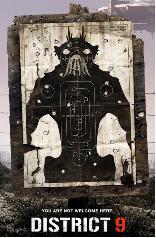 A private military contractor (MNU: Multinational United) is tasked to police and forcibly evict 1.8 million aliens from their District 9 slums to District 10 – a new refugee camp some 240 kilometres away. This shift actually further socially segregates (instead of integrates) these Earth-stranded aliens from humans. Supposedly for the good of everyone, it’s physical discrimination taken to the extreme, such that those who defy are even shot.

But as in real life, things are not so distinctly black and white, for the aliens are not all peace-loving. Some are troublemakers. Before we demonise them totally, let’s remember that many human communities have their black sheep too. If not, there would be no racism, ageism, sexism… Disparagingly called ‘prawns’ due to resemblance to them, these aliens are seen by some as unwelcome beasts, when they are every bit as sentient, if not more intelligent than humans. A case of speciesism simply due to being very different in form, language and culture. Humans are not always the humane ones, and we can always increase our humanity – till we become Buddhas.

MNU stands for the blurred globalised model of governmental corporatisation (or corporatised governance). Under the pretense of being the just middleman negotiating human-alien conflicts, they secretly arrest aliens with their sophisticated weaponry to uncover their technological know-how, turning these weapons against the aliens as guinea pigs too, when the majority of them come in peace. Instead of saving them, they are exploited. When the ideal of justice for all gets muddled up with profits and power for the few, there is already internal conflict. Whatever policies that spring from such a system can only perpetuate Samsara.

What happens, should the Earth unwittingly play host to an alien race one day? Which country will willingly welcome them? Would the country the alien craft hovers over or crash in be the default country? Or is it a global issue instead? Will they be seen as invaders or victims? Is this planet for us alone? Will humans be open-hearted enough to receive fellow denizens of the universe in need? (Buddhism is open to the possible existence of extra-terrestrials.) What if we ourselves have to evacuate from this planet, when it become unfit to live in? Will we be welcomed elsewhere or seen as pests too? Suddenly, the Buddha’s advocating of equanimous compassion for all beings makes a lot of sense.

The most poignant part of the story is where an MNU officer is accidentally infected with the alien genes. In his gradual metamorphosis to increasingly become alien-like, he literally becomes the ‘middleman’ that he was meant to be. But the more he transforms, the more is he ostracised – seen as a freak by both sides. A newly mutated case of speciesism. Even his lover alienates (pun intended) him eventually, simply because he had become too different in form, because she could not even imagine seeing him beyond his form. How deep, or rather, how shallow is her love then? Tragically, the story is based on real events… minus aliens, substituted with humans. (For more details, check out http://en.wikipedia.org/wiki/District_9) Yes, the above could happen to us too; not just to fictitious aliens. And anyone of us can be an alien when stranded in a foreign land.