Singapore -- The movie 'Detective Dee and the Mystery of the Phantom Flame', which of course mixes fact and fiction, creatively and colourfully tells the story of how, in 690 A.D., a giant Bodhisattva-like image was made in the likeness of China's first and only female 'emperor', Wu Zetian. Its creation created unrest when her key supporting men seemingly spontaneously combusted in ominous ways shortly before the completion of the statue. 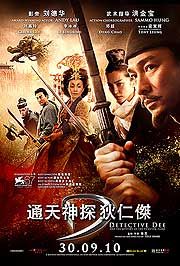 As the statue is to be launched on the very day she formally ascends the throne, any mishap that challenges it is seen as dangerous rebellion. Desperate to uncover the murderer, she appoints the ingenious Dee Renjie, who was once an imprisoned rebel himself, to solve the mystery. Realising the gravity of guarding her rule for the peace and well-being of the nation, he embarked on solving the whodunit.

Perhaps somewhat true in spirit to history, the film paints Wu Zetian in a deliberately ambiguous light, as it is hard to tell if she really was unscrupulous in her ways to attain the throne, or if she had the best of intentions. While history is rewritten by its winners, it is at times sullied by its opponents too. Interestingly, upon hindsight today, despite her faults, many historians view her to had been a capable and attentive leader on the whole.

Empress Wu was also one of the most powerful champions of Buddhism in China. During her reign in the Tang Dynasty, Buddhism reached its golden age. This is partly due to her promotion of Buddhism over Confucianism and Daoism as the preferred state religion. Almost for sure, she did this to counter traditional Confucian thought against female rule too. Unbeknownst to many, the beautiful 'Verse for Opening Sutras'(???)is attributed to her, which is still chanted by many Buddhists today:

The unsurpassed, profound, and wonderful Dharma
Is difficult to encounter in thousands of millions of eons
Now that I see and hear it, I shall receive and uphold it
And vow to realise the Tathagata’s true message.

Wu commissioned the construction of many Buddha images, with the most outstanding being the huge statues chiselled into the Longmen Grottes. It is said that the largest Buddha image there, of Vairocana Buddha, was carved in her likeness - probably in an attempt to justify her rule with the 'blessings' of the enlightened! Did she do this out of great ego or great compassion for the masses? Was it to remind all that she 'received' a divine mandate from the Buddha, that she is one with him? Is it inevitable that the growth of politics and religion must intertwine in a love-hate relationship?

For a brief period, she claimed to be Maitreya Buddha to garner more support! However, according to the sutras, Maitreya arrives to be the next Buddha in some 56 billion years' time! Royalty in the past, no matter what nation they are of, often like to imagine or even sincerely believe they are 'enlightened' or endorsed by the heavens to rule, that they are even above the reproach of the wise. But if this is so, how can they ever be overthrown? When they fall out of divine favour?

The truth is, bad kings and queens are deluded, who manifest egoism instead of enlightenment. However, their rule does stand for the collective karma of the masses at that point in time. The sutras speak of the rare coming and going of great noble Wheel-turning kings though, who practise, rule and spread the Dharma. In recorded history, the great King Asoka of ancient India perhaps strove to be one. Nice try! May all leaders of all nations continue to awaken to universal compassion and wisdom, to rule in more enlightened ways!