Private Hell of The American

Singapore -- Who is ‘The American’? He is ‘A Very Private Gentleman’ (the novel which the film was adapted from) – though not very gentlemanly when he kills. 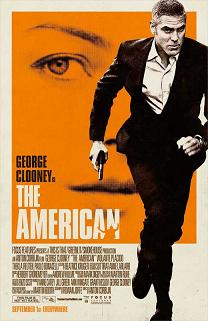 Due to the nature of his livelihood as a hired assassin, he is indeed very private though, to the point of hesitating to form any relationships. However, he becomes unlikely friends with a priest, who studies his quiet unsmiling character keenly. At one point, the priest remarks to him, ‘You cannot deny the existence of hell. You live in it. It is a place without love.’

Indeed, he struggles to void his heart of the ability to love or be loved, tormenting himself with guilt for having possibly killed an innocent ex-lover, who might had betrayed him… or not. He lives in constant vigilance and fear. The closer another gets to his heart, the more wary he becomes. Ironically, the more he loves, the more ready he becomes to kill the one he loves. Perhaps it is only natural – for how can a merciless killer be at one or at peace with being an affectionate lover? Buddhist psychology says that conflicting mind states cannot co-exist in any one moment.

He carries his personal self-made hell with him, even as he flees from one country to another. Hell is ultimately not just a plane of existence, but a state of mind too. A killer he is, who feared being killed, who distrusts those who he tries to trust, who seek his trust. Despite his, he rationalises that he does what he is good at, and what was needed. But if so, he needn’t feel an ounce of guilt? He should not had embarked on that he saw to be a path of no return in the first place. Dubbed ‘Mr Butterfly’, he reads about butterflies and protects an endangered one he sees. But isn’t he endangered himself by his killing? He must have some goodness, in wanting to care for some.

Was it ever too late for him to turn back? Even the path to hell allows a U-turn – by simply no longer killing in his case, and repenting. Even the Buddhist concept of the dimension of hell is time-limited in experience, because there is only so much evil one can do – that deserves hell, unless one continually does more evil. Run away if he must, but kill no more – not anyone he is paid to take out, and not anyone who wants to take him out – for the repercussions of karmic retribution are all too unpredictable while definitely upcoming. Even when he calls it quits, his employer sends another killer to silence him. Well, just as you can’t trust a killer, how can you trust his hirer?

Here’s the story with spoilers in brief… A(merican) kills B sent to silence him in Sweden for killing someone. A kills Lover 1 too, because she might have given him away. A flees to Italy to hide, while he takes up another job from his hirer, to design a gun for D, while he falls in love with Lover 2. Turns out that D was to kill A, as instructed by their same hirer, by A’s gun, which he designed to backfire. The hirer then tries to kill A personally, but they kill each other. In the last scene, A drives to Lover 2, whom he almost killed earlier due to suspicion. Looks like a case of four killers’ karma ironing itself out!