Tokyo, Japan -- Until recent years, Japanese zen has remained pretty much where it's always been -- inside a temple or between the pages of a Buddhist prayer book. 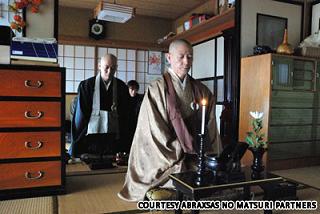 But with the bad economy and seemingly some of the worst politicians this nation has ever seen, is it any wonder that many people, especially those under 40, have lately been re-examining Buddhism in a new light?

A slice of insight into this trend is a movie called "Abraxsas Festival (Abraxsas no Matsuri)," starring comedian Suneo Hair, and iconic actress Rie Tomosaka.

Suneo Hair plays Jonen, a reluctant zen monk who winds up in black and white robes because his father deems it so. In Japan, the temple business is a family business.

The position of the head monk is passed from father to son, and it's a usually an ultra-cushy affair, padded with major tax breaks and temple land ownership. But Jonen is a pill-popping depressive who dreams of being the Japanese Leonard Cohen.

"Hallelujiah" is his thing, not zen.

"Abraxsas Festival" is directed by Naoki Kato -- a disciple of Kiyoshi Kurosawa, director of "Cure" -- and based on the novel by Akutagawa award-winning zen monk Genyu Sokyu.

The 52-year old Genyu has more than 20 publications to his name and is one of the pioneering influences that has brought zen Buddhism to the common people.

Genyu is the first modern monk to publicly say that zen can be an antidote to the woes of modern living -- up until now, most Japanese temples and sects had offered Buddhism as a way to elevate the spirit and discipline the body.

None had linked it outright to the realities of daily life.

Genyu on the other hand, was no stranger to the struggles of life in the "gekai," or "the world below." He spent his teens running away from home and most of his twenties were taken up with jobs like stoking the furnace of a municipal garbage incinerator.

At 32, Genyu became the vice head monk of a temple in his hometown in Fukushima prefecture. His first novel was based on his tumultuous personal experiences of having no home, no job, no hope.

Genyu pointed out certain aspects of the zen mindset that could ease the pain of tough times, and helped followers find a light at the end of the tunnel.

"Abraxsas Festival" is true to the novel, drawing on the performances of Hair as the whiny, insecure Jonen and Tomosaka as his hard-nosed but ultimately supportive wife.

Buddhist monks usually have stable marriages, partly because monks are often called to preside over funerals and few people like it when a divorced monk shows up to chant words of prayer.

Jonen and his wife are no exception -- they stay together less out of love than the Japanese double binds of family and business obligations.

Jonen is the typical modern Japanese guy going through the motions of life, while at the back of his mind looms a big question mark about who he really is.

There's a musician stashed inside the folds of Jonen's monk's robe screaming to be let out; eventually, Jonen learns that it's possible to do temple work and croon Cohen at the same time.
Zen and the art of being cool

The film comes out at an especially good time: disappointed and discouraged by the global recession, the nation is going through a renaissance of all things "wa."

Ukiyoye is in. J-pop girlie groups are in. Rice and domestic whiskey are definitely in.

As for religion, zen Buddhism has become an item -- a brand of zen that's an intriguing blend of traditional Japanese customs and concepts, plus the current Western interpretation that sees it as a way to boost self-esteem and attain a sense of well-being.

In the end, Genyu's message breaks through the murky clouds that hang over Jonen -- it's okay to be a nobody, because in every nobody there is only perfection.

-------
"Abraxsas Festival" is in Japanese theaters now and is slated to compete at the Sundance Film Festival 2011.m has become an item -- a brand of zen that's an intriguing blend of traditional Japanese customs and concepts, plus the current Western interpretation that sees it as a way to boost self-esteem and attain a sense of well-being.