A trip on Mahaparinirvan Express to explore the Buddhist trail

Varanasi, India -- The spectre of a kitschy image-led Hinduism pancaked in a simplistic, neo-conservative politics has been haunting India's latest election. The country's ancient history, always an enigma wrapped in undercared for manuscripts in nearly undecipherable languages, has however caught the interest of a few who grew up in Independent India and are past its median age of 25. 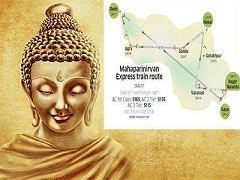 So, when the Railways started a train that would explore the Buddhist trail, I booked a seat. And it was with great expectation that I boarded the Mahaparinirvan Express early October from Delhi's Safdarjung station, marigold garland of the IRCTC (a corporate impostor spinoff of the Railways) in hand, while liveried bearers insisted on carrying my unwieldy backpack aboard.

The train had only 31 passengers, but 10 air-conditioned coaches were hauled throughout the week-long trip for them. It is one of the early bird gifts of the first tender and tentative public-private partnerships in newly opened economies; a nightmare for a CEO in chase of profits.

Another of those gifts was that we had an unusually qualified guide throughout the trip. RB Singh, a 74-year-old retired senior official of the tourism ministry, had an MA in Pali from the Nava Nalanda Mahavihara in 1963. The university was created to give modern, aspirational shape to the powerful symbolic meaning the ancient Nalanda had for newly Independent India.

{GAD)Bhikkhu Jagdish Kashyap, a Buddhist scholar-monk of the time who was born in Ranchi but spent time in Malaysia, Japan and Sri Lanka and mastered the Buddhist canon in Pali, headed the new institution. His tenure produced the first definitive 41-volume Devanagari version of the Pali canon. At one point, he even had to sell his house to pay his staff.

Despite such accomplishments, impoverished Bihar's inability to sufficiently fund the institution, saw the federal government move in and take charge in the early nineties, with generous goading from the Indophile, German professor Gustav Roth, who joined as its director in 1982.

Lucky With the Guide

That a motley bunch of urban tourists from Delhi, Mumbai, Bangalore with a couple from Nanded (Maharashtra) and another from Vizag (Andhra Pradesh) should have a man like Singh on a guided tour was a piece of luck that would flake out in some time.

Singh was an astute, bilingual storyteller. At the very first stop — Bodh Gaya — Singh told us the history of the temple and its significance to the story of the Buddha. When he reached the Bodhi tree, he insisted that this was the new outgrowth from the same tree under which the Buddha achieved enlightenment.
Singh regaled us with the lore of how one of Ashoka's wives, upset with him embracing Buddhism, attempted to make sure that the Bodhi tree the emperor was trying to consecrate was killed. She had the tree axed down and made sure that the roots did not sprout again by pouring sugar cane juice for the ants to nibble on them.

This current Bodhi tree, Singh said, was an offshoot from one of the two saplings that miraculously survived all the assaults on the original tree. I thought it was supposedly brought from Anuradhapura in Sri Lanka, where a sapling from the original Bodhi tree was planted. When I asked Singh, he threw a friendly arm around my shoulder and faked shock. "Do not say such controversial things. That is true according to history, I am telling you the story according to Buddhism."

A Different Side to History

In front of the Mahabodhi Temple in Bodh Gaya is a single-storey building with three small rooms housing Hindu deities in stone. Offerings of flowers and money had been made to these deities. Singh said this property still belonged to the Hindu mahant who had taken over the custody of the Buddhist temple and grown rich.

Jainism, followed about 200 years later by Buddhism, was the first of the two spectacularly successful reform movements against Vedic Brahmanism in ancient India. Both religions benefited from the patronage of kings and kingdoms and flourished for several centuries, before a wave of Hindu revivalism sidelined these two major world religions.

These shifts of power over the entire subcontinent must have convulsed society, seen bloodshed and great conflicts. However, an average educated Indian perception is that the transition was smooth and peaceful. I was hoping to see if some scrapes and scars still survived about these conflicts at these ancient sites.

The spectacular ruins of Nalanda were a visual palimpsest in red bricks on raw earth, rather than paint on a two-dimensional canvas, of the various dated layers of building over the ruins of the original university.

The university, renowned for being the world's first residential university, flourished between 5 and 12 century CE, though it is said to have existed at the time of Mahavira and the Buddha. One of Buddha's foremost disciples, Sariputta, was born and achieved nirvana here. Bhaktiyar Khilji burnt books and monks to destroy the venerable institution in 1193 CE.

The Nalanda museum had even more exciting things. What caught my attention was a sculpture of a decidedly blood-thirsty divine being trampling on an ascetic. It had a helpful caption underneath that said "Heruka dancing over Mahavira, the Jain Thirthankara". Another sign that the transition of power had not been as bloodless as we imagined.

Heruka is a Mahayana Buddhist figure with close affinity to tantric excesses on blood and gore. That there was a sculpture from before the middle ages depicting a violent overthrow of the earlier faith by the new one suggested a more organic and bloody history most Indians do not know.

Our next stop was Sarnath, the place the Buddha delivered his first sermon after enlightenment. I had visited Sarnath earlier, many years ago, so was interested more in the museum.
It was at the Sarnath Museum that another clue that suited my private search swept into view. As soon as you enter the museum, the first thing you see, occupying central pride of place, is the magnificent Ashoka pillar of the four lions that is India's national emblem. That a nearly 3,000-year-old sculpture of exquisite beauty and artistic detail, made of sandstone from Chunar in Uttar Pradesh, should retain the gleam of polished granite is jaw dropping.

The very first sculpture on the wall, to the left of the door, was striking. Only the lower torso wearing a pleated skirt with Buddha heads adorning its hem, obviously a fierce female deity in the fashion of Kali, trampled Shiva, part of the Hindu trinity, and his consort Parvati, with one foot planted firmly on each face. It was the Trailokyavijaya, as I was to learn later, a form of the fierce Vajrapani, who conquers the Lord of the three worlds, Shiva Maheswara. It is also a symbolically powerful representation of Buddhism's fight with Shaivism. And the Trailokyavijaya image was male, not female, as I had assumed.

These dead ancient images in stone sharpened my notion of how any new idea of medieval times, religious as much as temporal, would have to perforce use strategy of power to gain social traction of a scale momentous enough to establish itself.

Birth of a New Era

At Lumbini in Nepal, where Buddha was born as Prince Siddhartha of the Shakya clan, the only eyecatching thing was a bas-relief of the nativity scene of the Buddha. His mother, Maya Devi, stands holding the branch of a saal tree with her right hand, delivers the divine baby, according to legend, from her right side.

However, after a Japanese-funded project began excavation at the site that has been accorded the Unesco's heritage status, this nativity scene of one of the older religions of the world is under a thick canopy.

That work has just discovered stunning archeological evidence — the remains of a wooden structure, that places the Buddha in the sixth century BCE, a clear one century ahead of the most credible claims of the Buddha's lifetime so far.

Like so many other sites, the basrelief of Maya Devi is dated to be of the 4-5th century CE. The oldest evidence in Lumbini so far were Ashokan pillars that date 249 BCE. And, Buddhist worshippers did not frequent the place after about the 15th century CE, though Hindu worship of Maya Devi kept the place alive in the local community.

Then we headed to Kushinagar, the place the Buddha attained parinirvana. As our group was led through the solemn stories of the Buddha's final release from earthly existence, our guide said the Buddha died of poisoned mushrooms. I seemed to have remembered that he died after a last meal of pork from Abraham Eraly's Gem In The Lotus: The Seeding of Indian Civilization.

The one man in our group, a revenue service officer from Mumbai who had read deeply about Buddhism, heard my musing aloud at the edge of a group and told me that that was Hindu propaganda. I caught Singh later and asked him what he knew of the event from his study of the Pali canon. Singh said the Pali word for the last meal the Buddha had was "sookar maddam" and while maddam meant "meal" sookar could mean both mushroom and pork.

There were still enough embers hidden in the quaintly peaceful Buddhist sites that validated my own dilettantish assumption that Buddhism's spread must have operated in several zones of assault of the time. However, most such material was, well, material, and dead. It was at Sravasti, the site where the Buddha gave the maximum number of his sermons according to historical records and spent most of his rainy season retreats, at the ruins of a largish hall eyelashed with smaller chambers for scholars and monks, that Singh told us a story.

Resenting the spread of Buddhism, a group of locals hatched a conspiracy to discredit the Buddha at Sravasti and they prevailed upon a woman to tie up small wooden blocks to her tummy to suggest pregnancy and sent her over to the place the Buddha was preaching to his monks.

There the woman, known as Cinca Mavik or Sundari, accused the Buddha of "preaching serenely while I am in this state because of you", in Singh's words. The Buddha just looks at her compassionately and the wooden blocks fall from her tummy to the floor. She eventually reveals that the locals had used her against the Buddha.

In the 1960 novel The Serpent and the Rope, the esoteric Raja Rao posited that Buddhism lost out in the land of its birth because it abolished all rituals and became overly a religion of the mind. Fortunately, it has kept alive its stock of stories, the other great way that must explain the religion's return to some favour back in India.