Serdang, Selangor (Malaysia) -- IN THE outskirts of Varanasi, India, a peculiar edifice stood 44 metres tall, jutting above a sea of trees. 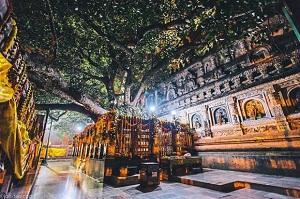 << Framed in flight: Bodh Gaya marked the spot where the Buddha attained enlightenment. The Maha Bodhi temple was built in commemoration of this momentous event.

That was what archaeologist Alexander Cunningham saw in 1833, which led him to one of the most important archaeological discoveries of the 19th century - the ancient city of Sarnath.

Buddhist scriptures described the city as having a park filled with free roaming deer, a place in which the historical Buddha was recorded to have delivered his first sermon.

Deemed as one of the four sites worthy of pilgrimage by the Siddhartha Gautama himself, no one - not even Buddhists - stepped into the place for more than 1,000 years.

Abandoned in time, the city gradually became a myth, turning into a place heard only in Buddhist stories, until Cunningham’s discovery.

In modern times, hundreds of thousands of Buddhist pilgrims visit Sarnath each year to pay homage to the birthplace of the religion.

Sunanda Ong Huey Chian, who went there two years ago, described her visit as “awe-inspiring”.

“It was where the whole teaching of Truth began,” said Ong, the director of Nalanda Dharma School.

She was reminded of the Dhammacakkap­pavattana Sutta, the Buddha’s first discourse.

“It was where the Buddha not only defined what suffering is, but also laid down the path leading to eternal happiness,” said Ong.

Standing on the spot where “it all started” 2,500 years ago, she felt a deep sense of calmness and was filled with gratitude.

“It was a powerful experience. I felt the immediate urge to end dukkha (suffering),” said Ong, who aspired to attain enlightenment one day.

Ong’s experience is not unique.

Buddhists, who went on a pilgrimage to India, reported feeling an immense increase in faith.

Apart from Sarnath, pilgrims will usually visit three other holy sites marking important events in the great teacher’s life: Lumbini (his birthplace); Bodh Gaya (his Enlightenment) and; Kusinara (his passing away).

In an attempt to bring the same experience to Buddhists who have not visited India, Dr Tan Ho Soon led a five-man documentary team to each site in 2014, recording their splendour and the history behind them.

Apart from the pilgrimage sites, the team also tried to capture the essence of Indian culture.

Dr Tan, an expert in Buddhist history in India, pointed out that the people’s way of life had remained the same for thousands of years.

“In India, the culture has endured while monuments crumbled,” said the founder of Nalanda Buddhist Society.

The team also managed to obtain filming permits for the Patna museum and recorded a legitimate Buddha relic.

“Most relics do not have history,” said Dr Tan, adding that the relic at Patna Museum has been authenticated and can be traced back directly to the Buddha.

Scriptural records indicate that when the Buddha died, his body was cremated and the remains distributed to eight kingdoms in Northern India.

“This relic is one of them,” said Dr Tan.

The team’s journey is on display at the “Passage Through India” photo exhibition from today to May 3 at Nalanda Buddhist Society, Sri Serdang in conjunction with Wesak Day. Entrance is free.