Bangkok, Thailand -- Thailand is over 95 percent Buddhist while its diverse population is nowhere near 95 percent pure Thai ethnically (around 40 percent are descended from other South-East Asian nations while the Chinese component is 14 percent) — in that sense at least Buddhism can claim to be the defining feature over any cultural trait. 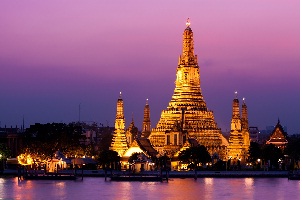 In historic terms church can also be considered older than state - whereas Buddhism was firmly established in Thailand over a millennium ago, there was no statehood until the Sukhothai kingdom founded in 1238 (even if the cultivation of rice had already been mastered 6,000 years ago with human population many millennia beforehand).

A visitor would have to spend many months or even years in Thailand before they could begin to understand how Buddhism shapes the moral fibre or elevates the spirituality of the people (although its contribution to social cohesion might be perceived rather faster) — but what the tourist can see almost on arrival is the stunning artistic inspiration expressed in so many magnificent temples.

Impressive as the temples often are, the deepest roots stem from Thai monasticism, which includes a unique form of religious conscription. Far from monks being social recluses, as in Western society, Thai tradition requires every male (including royals) to robe himself in saffron at some point in his life - the normal period is three months (usually coinciding with the monsoon season when it comes far more naturally to spend all your time in the refuge of the temples) although youngsters who find this obligation a real strain are permitted to limit it to a minimal five days.

This monastic period is dedicated to the serious study of Buddhist teachings - the young monks pick up quite a lot in three months while even five days is enough to absorb some basic principles.

But the historic polyfunctional role of monasteries is not limited to being places of worship or centres of monasticism or even sanctuaries - before there were newspapers, they were the news centres which also acted as labour exchanges, schools, hospitals, pharmacies and community centres, still retaining some or all of these essential social functions in countless villages.

Buddhism thus covers a broad cross-section of Thailand but it runs deep.