Bangkok, Thailand -- The pig stared at me. I had no mercy; I shot it anyway. Let me assure you I have not turned into a hunter. The said pig was already dead, its head decapitated and boiled whole. It lay on its final bed – an enamel tray before the Phra Buddha Chinnaraj. It was too good an opportunity to let this Kodak moment pass. 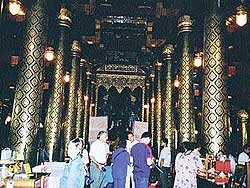 It is an honour to place a pig before Luang For Yai as the locals call their most revered Buddha statue. The pig is an offering of thanks for prayers answered. You can buy a pig’s head in the market place, boil it and offer it to the gods together with other fruits, delicacies and joss sticks.

We were at Wat Phra Sri Rattana Mahathat Vora-Maha-Vihara in Phitsanulok, Thailand. Quite a mouthful. The name is usually shortened to Wat Yai Chinnaraj. It houses one of Thailand’s most beautiful Buddha statues, Phra Buddha Chinnaraj, reputed for granting the prayers of devotees.

In the main prayer hall, devotees prostrate themselves on the carpeted floor to pray. Foreigners (or farangs as they are called in Thailand) sit with legs tucked sideways to gaze in awe at the splendour of the enormous Phra Buddha Chinnaraj.

Cast in 1357, the Buddha statue is stripped of its gold and glitter. Pending refurbishing, it is in ebony black. Sitting lotus-styled, the Phra Buddha Chinnaraj sculpture is revered by Thai Buddhists.

On the right of the main hall, a saffron-robed monk sits cross-legged on his wood-carved chair to bless devotees. We took off our Buddha amulets and put them in the monk’s brass tray. We knelt before the monk, our heads bowed, our palms pressed together in respectful prayer.

The elderly monk chanted a litany of prayers and sprinkled holy water on us. We dropped a donation into the box, and while still kneeling, backed away from the monk. It’s not done to turn your back on a revered monk.

On the left of the hall, devotees place food offerings. Whole pig heads are boiled in water and placed on enamel trays for the gods. Outside the temple, several stalls sell souvenirs. 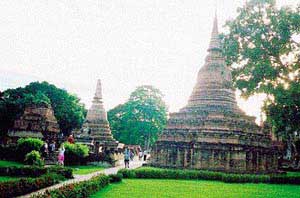 Wat Yai Chinnaraj is situated on the east bank of the Nan River. Walk out of the temple front gate and you reach the river where houseboats are moored. Little boys and dogs run happily about.

Phitsanulok is also famous for Flying Morning Glory, which is the creeper morning glory (kangkong) fried in a spicy, Thai style.

What is unusual about this dish is the way it is served. The chef stir-fries the vegetable, then tosses it into the air, over your head, to land in a plate being held out by a waiter. He then places this steaming plate of fried vegetables on your table.

I have also heard that the chef sometimes does acrobatic stunts. You can try to “catch” your own morning glory. Folks have tried it with hilarious results – the morning glory whizzing past their heads. It is indeed a skill to prevent your food from falling to the ground.

We then move to Sukhothai, one of the ancient capitals of Siam. The Sukhothai Historical Park is a Unesco World Heritage Site. Ruins of temples, palaces and irrigation systems evoke much of the former capital’s splendour. The grounds are landscaped to give it a cool, serene ambience.

The main and most famous structure here is the Royal Palace and Wat Mahathat, Sukhothai’s largest and most important temple. There are more than 20 chedis in the temple. Massive stone Buddha images preside over a complex of column and lotus-bud towers. Pagodas are reflected in serene lotus ponds.

Wat Si Sawai has three towers in the Lopburi art style. When King Rama VI of the Chakri Dynasty visited it as a Crown Prince, he found a statue of Siva. So it is assumed that Wat Si Sawai was once the ancient site of the Brahman religion before it was changed to a Buddhist temple.

I found a smaller temple the most captivating of the lot. The stone Buddha image of Wat Si Chum exudes an air of serenity; I can only imagine the magnetic draw of this magnificent image in its heyday.

With so much to see and do in this central region of Thailand, we definitely will return.