Taxila, Pakistan and me

Taxila, Pakistan -- Today, it's a tiny city 35 km from Islamabad, and home to its own university of Engineering and Technology with some 5,000 students. But Taxila is also one of the most famous archaeological sites in the world -- both an important historical centre of Buddhism, and a once major centre of learning where philosophy, arts, religion and culture were taught. 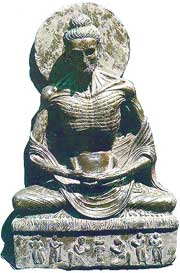 In ancient times, for example, Jaulian University and its many nearby monasteries were known for their excellence. Today, at the small but flourishing Engineering and Technology University of Taxila, I found everyone there determined to make their institution a modern world-class centre of excellence as well.

At Taxila, you also can see the great Buddha and follow in the footsteps of Alexander the Great (327 BC), and Asoka, the famous Buddhist king (272 BC).

In 50 AD, the great Kushan Dynasty was established, and within 200 years Taxila became its most celebrated centre for philosophy, arts and learning, attracting pilgrims and students from as far away as China and Greece. The last ancient historical period of Taxila came in the fifth century AD when the Huns established the great Gandhara civilization, which lasted several centuries. The Taxila museum houses a good collection of gold, silver coins, gems, jewelry and other antiques from these bygone times.

Even if you are well-travelled and widely read, you probably didn't know about this remarkable small city in Pakistan with its glorious history.
After all, Pakistan is not given much publicity in the West as a great tourist destination. When I told my Canadian friends that I would be traveling to Pakistan, some frowned and asked, "whatever for?" Others thought it was a risky idea, for several reasons, including bombs targeted at foreigners, and the American CIA's growing tendency to kidnap people they don't like during their travels. Another fear expressed by my friends was the high frequency of major earthquakes in that part of the world.
Well, they were right about the earthquakes -- on December 13, just days before writing this, I experienced a quake in Islamabad measuring 6.7 on the Richter scale!

But my visit to Taxila was a indeed an enriching and multi-dimensional experience.

One day, after a enjoying a lovely Pakistani lunch on the Taxila University campus (where fresh bread is baked daily in the dining hall!) I journeyed to nearby ancient sites, accompanied by some of the university's engineering students and professors. I was among a group of professors and graduate students from Europe, North America and the Middle East who had attended a three-day conference on microelectronics which I chaired. A young woman engineering student was my guide and she did an excellent job at explaining the history of the region.

I learned that Jaulian University had a marvelous complex of chapels, and a monastery complete with assembly hall, storerooms, refectory, kitchen, dormitories and bathrooms. On some of the beautifully surfaced buildings you can still see carved reliefs showing the Buddha, supported by rows of stone elephants and lions.

Buddhism in this region dates back to Siddhartha Gotama, who was born about 560 BC in north-east India. Some researchers say that he was of Mongolian stock. No portrait of him exists, however, and the earliest statues of him date from several centuries after his death, and were a result of Greek influence. Researchers now believe that the only remaining reliable trait about Siddhartha Gotama's personal appearance is that his earlobes were rather large. He was a Hindu who believed in reincarnation, but in not in the segregated caste system. He used to meditate often and while meditating under a tree one day, he attained the level of "enlightened one," after which he was known by all as "the Buddha." For the next 45 years he traveled the country, teaching, praying and founding groups of local
disciples to carry on his work.

Tradition has it that Devadatta (the Buddhist equivalent of Judas) once conspired to kill Gotama, and hired 30 bowmen for the job. But when the would-be assassins saw him, they fell to the ground, powerless. Gautama himself lived on unscathed and later died a natural death at the advanced age of 80 in about 485 BC.

Hinduism, like Judaism, was and still is a nationalist religion, while Buddhism resembles Christianity in its focus upon universality and evangelism. The Buddha used to teach that existence is bound up with dukkha (sorrow), annicca evanescence) and anatta (unreality). These concepts were already familiar during his time, but the practical remedies he proposed for social ills were new.

He taught that violence, theft, sex-offences, lying, and drinking are all forbidden. He also taught that the Absolute is the only Deity. Today, Buddhism can claim more varieties of practice and teaching than any other major religion.

The Buddha once asked a group of young male students, "Which is better for you; that you should be seeking after women, or that you should seeking after the Self?" They replied: "The latter," and then he asked them to sit down to be taught. We do not know exactly what he taught them... we can only imagine.