One fine day in Ayuthaya

B V Prakash visits Ayuthaya and Bangpa-In, Thailand, where Buddhist temples create a serene atmosphere for a weary tourist. 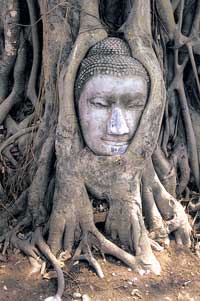 Ayuthaya, Thailand -- Ancient cities and ruined monuments always generate a sense of belonging to another era and help one travel back in time. Ayuthaya, the ancient capital of Thailand is one such place. Ayuthaya, I learnt was the corrupted version of Ayodhya, indicating the strong influence of Indian culture in the region.

Situated 80 Km north of Bangkok, it is a sort of riverine island being surrounded by three rivers viz, Chow Praya, Lopburi and Pe Sak. Such natural barriers were not only ideal to have in the kingdom’s headquarters, but they also paved the way for a booming trade with other countries in yesteryears.

Though the city founded in the 14th century withstood repeated invasions, it had to succumb finally to the Burmese in 1767 , who also left their impressions. The first temple of Buddha we visited symbolises this aspect very well. It is a tall temple with a high flight of steps with the lower half in Thai style and the upper section with a Burmese pagoda. Crossing the river over a bridge, we arrived at the main complex of the ancient city which is an expansive courtyard with three giant stupas or ‘chedis’ as they call them, in the centre. Going around, we could see the ruined Grand Palace building besides umpteen number of stupas, pillars and edifices in the process of crumbling. Right beside the entrance to this complex is the Buddha temple which has since been renovated. The 40-foot-tall, golden-coloured, sitting image fits snugly into the not-so-spacious interior. In the vicinity are many abandoned enclosures and a reclining Buddha in the open.

Driving along to the eastern side, we came to Wat Mahathat shrine with the face of a stone Buddha at the base of a tree. It seems the full image of Buddha which was once on the ground, sank in over the years with the roots of the tree engulfing the image except the face as if to enable devotees to have a glimpse! In the adjacent shrine of Wat Ratchabophit stand countless number of temples and statues with some of them leaning to bite the dust.

On the way back, we visited Bang Pa-in, also an island, well known as the summer palace of the Royalty. The palace is a very large complex with an outer palace and an inner one. The area is so vast that to enable tourists not keen to walk electric buggies are made available. The Royal residence is a stately mansion built by King Chulalongkorn in 1876.

The plush interiors with an European influence houses the throne and the attractive oil paintings adorn the rooms. Almost attached to the building but separated by a narrow canal is a cute floating house. The most impressive structure, of course, is the pavilion in the middle of the pond with typical Thai roofs and a bronze statue of the king.

Moving over to inner palace, we entered the red-roofed Chinese style residence exquisitely decorated in gold and silver. The brightly coloured tiles and aesthetic furniture lend a charm to the ambience. The ground floor has an impressive Chinese throne. The Chinese constructed this as a friendly gesture to the king. In close proximity is another royal chalet in a lovely green shade which was the favourite place for the kings to stay.

Walking along the infinite monuments and memorials, we came to the colourful view tower built on a pond. It was from this tower that the kings used to look at the enchanting scenery around.

Having a glance at the memorials for the Queen and the Princess close to each other, we almost completed a walking tour of the place. While Ayuthaya, with ancient temples, statues and ruins of buildings evoked a sense of nostalgia, the colourful palaces and monuments of Bang Pa-in with a network of green canals, lawns and parks mesmerised us with a delightful feeling.