A glance of 9 mysterious and fascinating lakes in Tibet

Lhasa, Tibet (China) -- Namtso means the lake of heaven in Tibetan language. Located between Dangxiong county and Bange county 240 kilometers north of capital Lhasa, Lake Namtso has a length of 70km and a width of 30 km, and covers an area of 1,940 square kilometers. It is the largest salty lake in Tibet and the second of this kind in China. 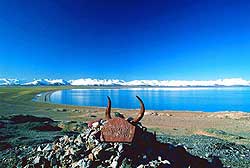 << Lake Namtso: guarding her proud and arrogant Mountains of Nyainqentangla

According to historical records, Lake Namtso was named because it was as cerulean as sky, but local herdsmen named it with the meaning of 'heaven lake' because it was situated as high as sky. The lake has Mountains of Nyainqentangla perennially covered with snow to its south, plateau, hills and lakeside to its north and west respectively. Grassland in the surrounding areas makes the lake a place with plenty of water and lush grass.

Nicknamed Lake Cuogao, Lake Basum is a sacred lake of Nying ma pa and also the largest freshwater-dammed lake in Dongbu, Tibet. The lake is surrounded by mountains and of a temperate climate. With an average height of 3,538 metres above the sea level, the lake has a length of 15 km and a width of 2.5 km, and the deepest point goes as deep as 166 metres. 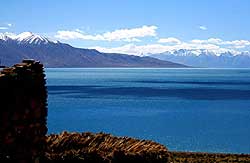 The west of the vast Qiangtang area is the world's well known depopulated area. In Shuanghu and Wenbu regions, the population density is around one in every six kilometres. The famous Devine Mountain Daguo and one of the four Tibetan great lakes Lake Dangreyong are located in desolated Wenbu wilderness. People can only learn about these regions from mythology and legend.

Situated at 4,500 metres above the sea level, the crescent-shaped Lake Taksas Tal is closely located to the sun-shaped Devine Lake Mapangyong. Their natural forms have shown a kind of ultimate harmony.

Tibetan Buddhists hold that Lake Mapangyong, the holiest and purest lake on the earth is the sweet dew bestowed by Shengle Dazun. The holy water can purify human body and mind. It is said that the lake is the most ancient and the holiest palace in Buddhism and Hinduism. It is the perfect lake, a genuine heaven in the universe, a Shangri-la for all immortals and a Land of Ultimate Bliss.

Pelden Lhamo, the name of a noted immortal protecting the Buddhist doctrine in Tibetan Buddhism means Pal-Dan Lha-Mo in Chinese. The cranial-bone-shaped lake is said to be the incarnation of Pal-Dan Lha-Mo's cranial bone by Tibetans. And many local people also call it Lake Zhuoma.

Lake Yamdrok enjoys the laudatory title of the most beautiful water in the world. Winding through the mountains for some 130 kilometers, the earring-shaped lake can only reveal its true face when being viewed from the sky. Illuminated by sunshine at different time of the day, it will present the colour of cerulean in various gradations.

As the folk legend goes, Selin, a devil living in a place west of Lhasa swallowed hundreds of creatures, including human being, birds and beasts everyday and nobody knew what to do with it. One day Guru Rinpoche found and subdued Selin and forced him to stay in a vast and turbid lake by confessing its evil-deeds. Later the lake was named Lake Selindui, which meant the lake of devil.

Although Lake Palgon is associated with neither religious legends nor immortals, it is a great lake which enjoys the most popularity. While the part of the lake in Kashmir region is of salty water, the part in Tibet is of fresh water, with abundant fish and lush grass on the bank.