Mt. Emei, China -- Four in the morning seemed like an unholy hour to get up for a mountain, but Mt Emei in China’s Sichuan province, is well-worth the trouble. The whole idea was to catch the sunrise, and this entailed a two-hour bus trip from the hotel to the cable-car station, where we would ride all the way up to the Golden Summit of Mt Emei. 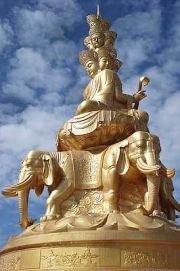 The 3,099m mountain, declared a Unesco World Heritage Site in 1996, has long been revered as one of China’s four holy mountains sacred to the Buddhists. For 2,000 years, Buddhist pilgrims have been making the journey to Mt Emei, the misty and mystical home of a hundred temples, monasteries and pavilions. Few would have failed to notice the view along the way.

The name Emei literally means “delicate eyebrow”, and the name came about supposedly because locals believed the peaks of the mountains here resemble the eyebrows of a beautiful woman. It was only in recent years that the provincial government started to heavily promote certain areas of the mountain as tourist attractions.

I was there to cover the recent opening of the Golden Summit’s new statue of Bodhisattva Samantabhadra (Puxian). At 48m high, the gilded, 660-tonne statue is the tallest of its kind in the world and has 10 faces which symbolise the 10 Vows of Bodhisattva Samantabhadra (a Buddhist deity). Built at a cost of $2bil renminbi (RM920mil), it took 17 months and over 1,000 craftsmen toiling through bad weather to build.

The simple opening ceremony also marked the restoration of the Huazang Temple, made up of three buildings popularly known as Gold Palace, Silver Palace and Bronze Palace. My favourite has to be the Silver Palace, which looks particularly striking with its sleek roof and carvings of dragons and sacred elephants.

At the Golden Summit itself, there is a hotel with nifty facilities, and, all along the stairway leading to the temple, there are plenty of snack and souvenir stalls. There are many decent washrooms here, although there was one whose cubicles did not have doors. This is China, after all, and tourists must always come prepared. A warm coat is a must, perhaps even an umbrella, to fashion a makeshift door.

The weather here can be unpredictable. One moment your teeth are chattering from the cold; the next, it is blazing hot as the clouds drift away and you may end up getting sunburnt.

During the opening ceremony, hundreds of people flocked to the summit to pray and take photos. Despite the crowds, it’s not too difficult to feel as if you’re on your own if you walk a little distance out and take a cliff-side path here, or a lonely balcony there. 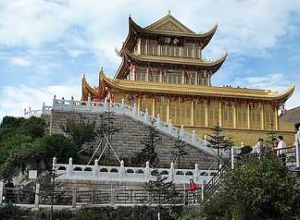 The morning we were there, the view was almost surreal, with mist blanketing the valleys as if the mountain was drifting into a land of fairies. Maybe there is a reason Mt Emei is considered sacred, after all.

When the time came to leave, we discovered that the place actually has two cable-car systems – one is a two-seater carriage system, the other a large one that can comfortably accommodate 20 people at one time. The problem, though, was that the queue was insanely long.

While we deliberated on where to queue, a few men sidled up with colourful bamboo-like sedan chairs. Perhaps we felt like travelling down the mountain in the style of old? For a price, these “human taxis” will bundle you into the chair like a maharaja, prop you up on their shoulders and carry you down the thousand-or-so steps.

As we finally managed to squeeze into a cable car, my only regret was not hanging around long enough to get a bird’s eye view of the famed Sea of Clouds, one of the four scenic wonders of Mt Emei. But at least we managed to catch one of the other wonders: sunrise over the mountains, with the sky in a riot of colours: gold, mauve, red, yellow and orange.

Now that was an eye-opener.