Tokyo, Japan -- During the reign of Emperor Shomu, the country suffered epidemics and major conflicts. Hoping to relieve the anxiety of the people and bring peace, Emperor Shomu built the Great Buddha at Todaiji temple. 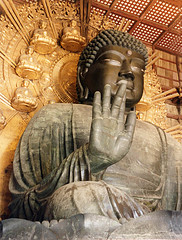 The image is about 15 meters tall, made of copper and plated with gold. It is believed to weigh about 380 tons. To make the original image, 500 tons of copper and 440 kilograms of gold were collected from across the country.

The construction of the image was a national project, involving 2.6 million people, although the country's population was only about 5 million at the time.

The image and the temple were damaged by repeated natural disasters and civil wars, but they were frequently repaired and rebuilt.

The face of the current Great Buddha was restored during the Edo period (1603-1868) and is not exactly the same as the original Buddha.