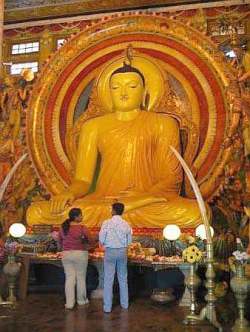 << In his presence: Newborn babies are taken here and placed on a silver platter to be blessed by the Buddha and the monks.

On the way to Gangaramaya, all tours stop at Beira Lake, Colombo’s largest freshwater lake, which has on its shore a little temple that looks out of place in Sri Lanka.

The beautifully proportioned temple with rows of Buddhist statues reflected in the calm water looks typically Thai. And so it is, for the building is a gift from Bangkok’s Buddhists.

Many of the buildings look disconnected and different from each other, sharing only their common location. There is a blue-roofed building that looks immaculately new while its stone edifice looks ancient. It turns out the blue temple is dedicated to Hindu deities andwas built with aid from Japan. This may explain its faint resemblance to Shinto shrines. You will also recognise the Chinese and Thai influences in the other buildings, which readily indicate where the donations that go into building them come from.

Gangaramaya started as a small hermitage on marshy land in 1890 before growing into a famous vihara (temple). Today, Gangaramaya is both a place of worship and a centre of learning.

Inside the complex, you will find several pagodas, classrooms, a huge bodhi tree planted from a sapling said to be from the tree that shielded Gautama Buddha during his epic meditation, museum, library, residential hall, and alms hall.

Gangaramaya came to be in the 19th century when the Venerable Hikkaduwe Sri Sumangala Nayaka Thera (1827-1911) begun a Buddhist resurgence at a time when the religion was on the decline. He managed to establish a Buddhist school with just seven students. From this humble beginning, Gangaramaya grew to what it has become today. Entering the main temple, one is astounded by the colour, artistry and craftsmanship of the myriad statues, which rise from the floor and appear at every level up to the ceiling.

Every available space is given over to sculptural depictions of the Buddha, his disciples and various deities in the Buddhist pantheon. 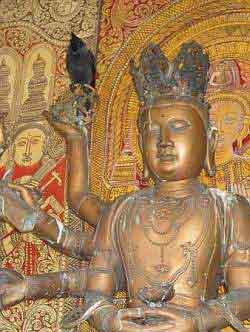 To attain Nirvana, or enlightenment, is now Colombo’s biggest cultural event and attracts thousands of tourists. The Perahera in the hill resort of Kandy is more famous but that one happens in August. Just outside the main temple is Rajah, the chief elephant, which takes the lead during the Perahera procession. Tourists can have their photos taken with Rajah, as the mahout is on hand to handle the pachyderm and accept your cash contribution.

There is also, incongruously, a small car museum. The early 20th century printing presses within the temple complex also seem out of place, but they all form a part of the temple's history.

Spend a leisurely two hours here. Heck, you can even while away an entire afternoon here in Gangaramaya's atmosphere of calm and reverence.