Bangkok, Thailand -- The Tiger Temple or Wat Pha Luang Ta Bua is famed for its practice of conservation and the Buddhist culture of peace. Getting its name from the many tame Indochinese Tigers that freely roam the ground, the Tiger Temple is a popular attraction for many travellers to the country. 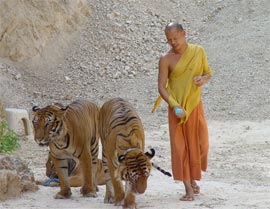 Located in Western Thailand, the Buddhist temple was once just a forest temple and sanctuary for numerous animals. In 1999, the temple received its first tiger cub, and since then many tiger cubs have been brought to the grounds as orphans and have been reared by the temple’s monks.

It is a place that is commonly considered to be an animal sanctuary and conservation centre. And it is no surprise when one considers the number and range of wildlife that resides in the temple grounds. Despite this, the monks’ conservation practices have to be considered different from those of the Western world; the tigers of Wat Pha Luang Ta Bua are treated as family members.

Some people may criticise the way that the tigers have been reared and how tourists are charged to see the tigers, but this only has been done so that the ‘Tiger Island’ can be built. It is an island that will allow for the tigers to roam free in a place that will protect them from humans. While the first generation of tigers will never be able to be released into the wild again, Tiger Island will allow for the new generation of tiger cubs to learn to hunt and feed themselves and, it is hoped, that they will eventually be released into the wild.

With an entry fee of 300 baht or approximately US$10, the funds assist in the completion of the sanctuary. It is currently still in progress and is hoped that it will be completed soon.

For more information, visit the Tiger Temple website at www.tigertemple.org.