A Buddhist group on a pilgrimage to Sri Lanka continues its journey.

Colombo, Sri Lanka -- To a group of devotees on a recent eight-day pilgrimage to Sri Lanka, the trip was no ordinary sightseeing tour of beautiful temples and ancient cities. We learnt about the country’s historical background and the places related to the Lord Buddha. 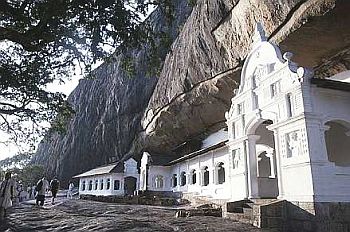 << Panoramic: The expansive vista at the top of Dambula Cave Temple, in Central Province of Sri Lanka. – Pix by ONG SOON HIN/The Star

There are still some buildings that reflect the glory of old kingdoms and civilisations. We felt transported back to the past even though, in some places, what we saw were just the ruins of past grandeur.

By the end of our trip, we got a glimpse of the spread of Buddhism in Sri Lanka and could appreciate the significance of venerating the Bodhi tree. All of us made wishes for miracles under several Bodhi trees.

The following is the second half of our pilgrimage programme.

The devotees continued their trip to Polonnaruwa, the ancient capital of Sri Lanka (11th to 13th centuries) and a world heritage site. This city in the North Central province is one of the best planned archaeological sites in the country – testimony to the greatness of the kingdom’s first rulers.

But the Malaysian media accompanying Ven Rev K. Sri Dhammaratana Nayaka Thera headed for Tangella, an area affected by the tsunami on Dec 26, 2004.

After a five-hour journey, we were at the Tangella District Hospital, built with generous donations from Malaysians. A project mooted by the late Ven Rev K. Sri Dhammananda Nayaka Thera, it is the best hospital in the district.

On the way, we stopped by a memorial plaque at Peraliya and prayed for the lost souls. This fishing village was destroyed by the tsunami, which also hit the Queen of the Sea engine no.59. Eight of its carriages on the Colombo-Galle express route was derailed, killing some 1,270 passengers in the world’s worst ever train disaster.

En route, Rev Dr W. Ariyadewa, the chief monk of Siri Wijayarama Kaluvadumula Ambalangoda met up with and guided Rev Dhammaratana to his temple nearby to view some of his wood sculptures of Lord Buddha, which he plans to exhibit at the Buddhist Maha Vihara in Brickfields, Kuala Lumpur, next month. We also stopped briefly at Fort Galle before heading off to Amaya Lake resort, Dambula, for the night. 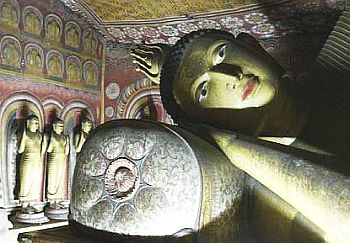 << Sweet repose: A reclining Buddha statue in one of the caves of Dambulla Cave Temple.

After breakfast, we proceeded to the ancient city of Anuradhapura (the capital of Sri Lanka from 5th century BC to the 10th century AD), 205km from Colombo. A world heritage site, Anuradhapura used to be the most celebrated of Sri Lanka’s ancient ruined cities.

Its most renowned relic is the sacred Bo(dhi) tree, said to have grown from a branch of the tree under which the Buddha attained Enlightenment. It was planted 2,250 years ago and is the oldest historically authenticated tree in the world.

The city’s greatest treasures are its dagobas (stupas), constructed of bricks and hemispherical in shape. The most notable of these are the Ruvanveli Mahaseya dating back to the 2nd century BC, the Jetawanarama and the Thuparama Dagoba (which is enshrined with the collarbone of the Buddha). The Ruvanveli Mahaseya was built by king Dutugemunu (161-137 BC) and is the most venerated among the stupas in Sri Lanka. It was constructed in the Bubbulakara or the (common) bubble shape.

The grounds of temples in Sri Lanka are sacred and visitors are required to remove their shoes. At Anuradhapura, the sands were burning and it felt like we were walking on a pit of coals. We were literally jumping across from place to place. 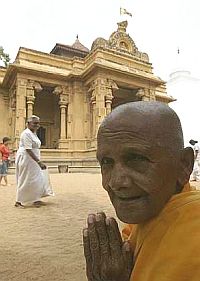 At Ruvanveli Mahaseya, the mid-day sun scorched the ground and it was a challenge to walk the entire path to admire this dagoba up close.

Our third stop was Dambulla. The Dambulla Cave Temple, also known as the Golden Temple of Dambulla, a world heritage site, is in the central part of Sri Lanka. Atop this vast isolated rock mass towering 160m is the country’s largest and best-preserved cave temple complex. This rock temple dates back to the 1st century BC and the Dambulla caves are said to have sheltered King Valagamba (also known as Vattagamini Abhaya) during his 14-year exile from Anuradhapura.

When Valagamba regained the throne, he built the most magnificient of rock temples on the island. The main attractions are spread over five caves, which contain statues and paintings related to Lord Buddha. In all, there are 153 Buddha statues, three statues of Sri Lankan kings and four of gods and goddesses.

Sigiriya Rock Fortress in Central Sri Lanka was where we’d been scheduled for a climb. Our tour guide warned that the climb would be difficult – it was twice as steep as Dambulla Cave Temple, and twice as far. About half the group took up the challenge, while splinter groups headed for a massage or stayed back to relax at the Amaya Lake Resort.

This fortress is the 5th century “Fortress in the Sky”. It is a rock fortress where King Kasyapa (477-495AD) ruled and is world famous for its frescoes. A great engineering feat, Sigiriya is also a fine art gallery. It was said to have 500 paintings, but today, only 21 remain.
It is also known as Lion Rock because a huge lion used to stand guard at the entrance. Within its triple-moated defence, the huge rock rises to 370m. On its summit are the foundations of what were once a great and sumptuous palace and gardens, complete with swimming pool.

Kelaniya Raja Maha Vihara was our next stop. To the Buddhists of Sri Lanka, it is one of the most sacred places of worship because the site was hallowed by the visit of the Buddha 2,500 years ago. In the past, Kelaniya was a large city and the temple was one of the largest and most beautiful temples in the country. 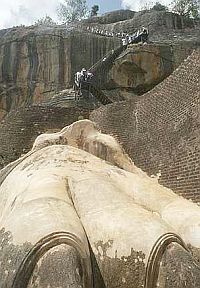 << A sight to behold: The colossal paw of the lion at Sigiriya Rock Fortress.

The Kelaniya stupa is the most well known of the “paddy-heap” stupas in Sri Lanka. Outside the temple are pavillion-like niches with various figures. The balustrades on the entrance stairs are formed by two lion-elephant (gajasinha) and the walls inside the temple are decorated with fine paintings dating from the late 18th to the early 19th centuries. To the left of the temple is a huge and ancient Bodhi tree.

After Kelaniya, we had some time to shop at Odel, one of the most fashionable malls in Colombo.

We checked out of the hotel early in the morning with happy memories of our trip, and one word, Ayubowan (a Sri Lankan greeting that says, “May you enjoy the gift of a long life”), stayed in our mind.

Even though some of us did not reach the summit of Sigiriya Rock Fortress to admire the view, it did not matter. As pilgrims, our purpose was not to conquer this palace in the sky. Rather, we were there to walk little steps and reinforce our faith in Lord Buddha.

As Rev Dhammaratana said, “Devotees can see and learn more about the history of the temple or understand the simple act of venerating a Bodhi tree. They can think about Buddha as their great teacher and his great teachings. In just half-an-hour, they can think positive thoughts and get inner peace.”