People of different faiths lived side by side in Gaochang until the city was destroyed 700 years ago.

Yining, Xinjiang (China) -- LESS than an hour east of Turpan, the ruins of the ancient city of Gaochang can be reached by a highway that runs along the base of the Huoyanshan (Flaming Mountain), a barren, loaf-shaped range 100km long. Under the searing summer sun the red sandstone mountain looks as if it is on fire, hence its name. 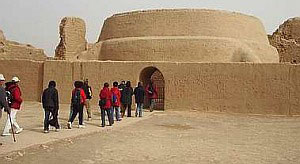 As with many other famous spots in China, there are more colourful explanations as to how Huoyanshan got its moniker. One legend says that the Monkey King Sun Wukong kicked over a brazier when he was fighting with some divinities in heaven and the charcoal fell onto the mountain, which burst into flames.

The adventures of the wily and mischievous Monkey King, who accompanied Tang dynasty monk Xuanzang on his journey to India to obtain the Buddhist sutras, have been the subject of countless operas, cartoons, movies and television shows. I would hazard a guess that there is not a single child in China who has not heard of him.

Xuanzang was, of course, a real person although his incredible journey across the western regions was fictionalised in the Ming dynasty novel, Journey to the West.

Another story says Xuanzang found his sojourn to India blocked by the flames of Huoyanshan. With the help of Sun Wukong he used a magic fan to put out the flames, but the mountain has remained red ever since.

As we neared Gaochang, the remnants of the old city’s ramparts soon came into view, and inside the citadel, the broken walls of temples and buildings constructed of yellow-brown mudbrick and earth. Standing as testament to the city’s size and importance in its heyday, the ruins extended in all directions as far as the eye could see, so we chose to ride donkey carts to get to the old city centre.

Gaochang was the site of a military garrison during the Han dynasty 2,100 years ago. It is said that General Li Guangli used the outpost during his campaigns into Dawan (Ferghana) to acquire the blood-sweating heavenly horses for Emperor Wudi.

In the Tang dynasty Gaochang became the residence of the county’s military governor and the citadel blossomed into a centre of religion, where Buddhists lived side by side with Nestorians, Zoroastrians, Daoists and Confucians. After the collapse of the Tang in the 10th century, the Manicheist Uygurs established their capital at Gaochang and continued the city’s tradition of religious tolerance, until the Muslim Mongols destroyed the kingdom 400 years later.

One can still discern many old temples in the ruins, the most important being the round roofless hall where monk Xuanzang lectured on Buddhism 1,400 years ago, on his way to India. Partially restored, it is shaped like a two-layered birthday cake with portions of the original wall still intact. Sadly, the niches where Buddhist images once stood were bare.

Quite aside from the ravages of time, we were told by our Uygur guide that the Muslim Mongols took particular aim at the images, frescoes and manuscripts in the temples, and much that was left was stolen by European and Japanese fortune hunters in the last two centuries. Nevertheless we still saw examples of murals and artefacts from this ancient outpost in the small Turpan Museum.

Outside Turpan’s town centre donkey carts remain an important means of transport and in the dusty farming villages, makeshift stalls at street corners offered for sale simple household items and mutton, which our coach driver said is the best in the region. Unlike Urumqi, time seemed to stand still in Turpan.

Nothing could have prepared us, though, for the station where we would board the overnight train for Gansu province. We were told the road to the station is often buffeted by sudden windstorms and as such we had best allow two hours to get there. The ride was indeed a little bumpy and gusty, and when we arrived it was dark outside the remote and ageing train station. It looked deserted except for a few snack vendors.

As we stepped inside the station, however, I was startled to find the large, dimly-lit waiting hall chock-a-block with passengers. Every single seat in the row upon row of chairs was taken and the aisles were littered with battered suitcases, over-stuffed plastic bags and baskets of food and fruit. Judging from their faces and clothing it was obvious these people were local and mainly rural, but in that sea of humanity it was difficult to discern who was Uygur, Han, Kazak, Hui or any of Xinjiang’s other ethnic groups.

My first glimpse of Xinjiang was of modern Urumqi and my last was of a scene little changed from a hundred years ago. As we boarded the train and set off into the night for our 10-hour journey east across the foothills of the Tianshan range, I wondered what we would find at the edge of the Gobi desert in Gansu province.

# Ziying travels frequently to China in support of a school in a rural village. The country’s rich culture and history are her lifetime passion. She can be contacted at ziyingster@gmail.com.